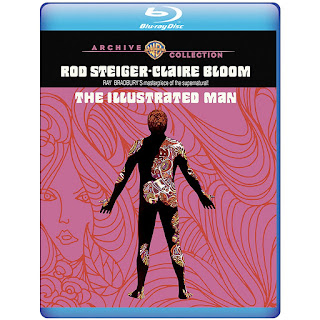 The Illustrated Man is a sci-fi anthology film based on stories from a book by Ray Bradbury. I vaguely recall it popping up on TV when I was a kid, somewhat floored by the twist ending of the third and final segment. Without giving too much away, I never gave the film another thought until years later, when I first watched The Mist.

No, I don't believe director Frank Darabont consciously ripped-off Bradbury when adapting King's novel, but I'll bet he once read the original story ("The Last Night of the World") or saw this film.

Reviewing The Illustrated Man on Blu-Ray, I was soon struck with another thought (aside from the opinion that it hasn't aged very well): The first segment, "The Veldt," is a futuristic tale about two parents with growing concern over what their children are doing in their "nursery," a VR room that operates very much like the Holodeck in Star Trek: The Next Generation. Not to say Gene Roddenberry is a plagiarist, but the concepts are remarkably similar.

As for the film itself, The Illustrated Man is definitely a product of its hippy-dippy decade. It looks, sounds and plays like a bizarre made-for-TV movie from the late 60s. And if you can imagine what The Twilight Zone would've been like if Rod Serling & Richard Matheson passed the bong around before hitting their typewriters, you'll have a good idea of the type of trippy tales in store. The segments themselves aren't bad. Of the three, "The Last Night of the World," is the best story, while "The Long Rain" is the most visually interesting (Planet of the Apes fans might even recognize the spaceship). Rod Steiger and Claire Bloom are featured in all three (playing different characters). Co-star Robert Drivas has supporting roles in two of them.

The wrap-around story, however, is awful. Again we have Steiger, practically gnashing the scenery as Carl, who's been tattooed from head to tow by a mysterious woman he claims is a time traveler, and his "skin illustrations" are actually visions of the future. When he isn't regaling a young drifter, Willie, with tales behind the tats (the aforementioned segments), Carl behaves like a psychotic vagrant, screaming, ranting and repeatedly removing his shirt (and Steiger ain't exactly known for his physique). He also has a small dog he keeps in a bag (!), which he yells at almost as often as he does Willie, who does little but look dumbfounded by it all. Maybe these wraparound segments make more sense if you're high, but they seem to go on forever without having anything relevant to say. That time would have been put to better use with another classic story from Bradbury's original book.

Still, you don't have to let it sink the entire film. That's why God gave us the skip button. The three tales themselves aren't life-changing, but worth checking out at least once. The Illustrated Man hasn't aged well at all, but it arguably presented a few of Bradbury's nifty ideas decades before more renowned folks claimed them as their own.

EXTRA KIBBLES
FEATURETTE: "Tattooed Steiger" - a vintage short about the process of drawing the tattoos on the actor.
TRAILER (which is nearly as bizarre as the movie)