Born in China is the latest film in the DisneyNature series, sort-of the 21st Century version of all those True-Life Adventures they used to make.

Some of you might remember those: Most of them were theatrical short subjects which occasionally showed up on ABC‘s Wonderful World of Disney on Sunday nights. They were cheerful - sometimes humorous - looks at various critters and their environments, accompanied by cornball narration from Winston Hibler. These movies were always fun, but not always documentaries in the truest sense. As we grew older and wiser, it was obvious many scenes were staged and scripted for the sake of entertainment.

The big difference is the DisneyNature films are big, sprawling and gorgeously shot. And while they attempt to turn their subjects into "characters," none of the animals are manipulated into performing. They usually round up an actor to provide narration - John Krasinski this time - which is created to manipulate the audience instead.

In my household - with two daughters - two animals rule the Cutieverse: Cats and pandas, especially baby cats and pandas. Born in China has both, meaning every time they happened to be in the room when the trailer showed up on TV last spring, I saw this: 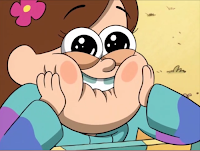 Predictably, there's more cute in Born in China than the Surgeon General recommends, and not just panda and snow leopard cubs. We also follow a family of golden snub-nosed monkeys and a migrating herd of chiru, both with their own fair share of doe-eyed darlings. Watching this disc with my daughters, they patiently waited through those segments, which have their cute moments, but what they really wanted were more pandas, more kitties. So whenever the narrative returned to them...well...

But cute isn't all Born in China has to offer. It's the best looking DisneyNature film to-date and these "stories" are more interesting. One is even surprisingly poignant, which usually never happens in these movies (though the narrative does try to sugarcoat tragedy by rambling about the circle of life). Without giving anything away, when one of my daughters remarked how sad one animal's story was turning. I reassured her, "Don't worry, this is Disney. These things always end happy." However, once it was over, she turned to me and quipped, "Thanks a lot, Dad." 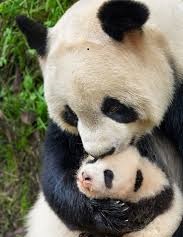 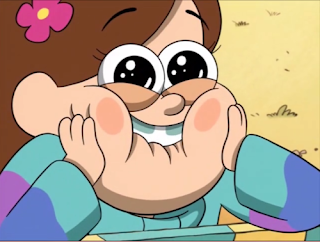 While the film does have its unexpectedly heart-tugging moments, it's also quite funny at times. The male chiru's courting dance had us laughing until it hurt, as did a lot of the unused footage that plays during the end credits, especially when the snow leopard cubs engage in the nature film version of breaking the fourth wall.

Born in China is another impeccably-crafted entry in the DisneyNature series, and the most engaging one since 2014's Bears. It's charmingly narrated, filled with beautiful imagery and, of course, dishes up an abundance of cute.

EXTRA KIBBLES
FEATURETTES: "Panda Suits & Bamboo Shoots"; "Walking with Monkeys"; "Masters of Camouflage"; "Wading Through Wetlands" (All four are behind-the-scenes shorts about the painstaking efforts by the crew to capture these animals on film).
MUSIC VIDEO: "Everything Everything" by American Authors
PROMO VIDEO: "DisneyNature: Get Inspired, Get Involved"
DVD & DIGITAL COPIES
KITTY CONSENSUS: 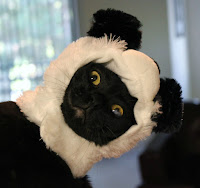 PURR-R-R...LIKE A GOOD SCRATCH BEHIND THE EARS
Posted by D.M. Anderson at 9:37 PM