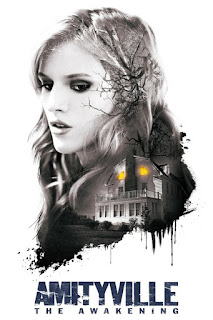 EVERY HOUSE HAS A HISTORY. THIS ONE HAS A LEGEND.

Forty years later, something is stirring again as a new family moves into 112 Ocean Avenue in AMITYVILLE: THE AWAKENING, the terrifying revival of the popular franchise. The film will debut exclusively for free for a limited time on Google Play on October 12, 2017 and will also be released by Dimension Films in select theaters on October 28, 2017.


AMITYVILLE: THE AWAKENING was produced by Jason Blum of Blumhouse Productions (GET OUT, THE PURGE, INSIDIOUS, PARANORMAL ACTIVITY), Daniel Farrands (THE HAUNTING IN CONNECTICUT) and Casey La Scala (DONNIE DARKO, THE REMAINING).


The film follows Belle (Bella Thorne) and her family after they move into their new home, but when strange phenomena begin to occur in the house, Belle begins to suspect her mother (Jennifer Jason Leigh) isn’t telling her everything. She soon realizes they just moved into the infamous Amityville house where between illusion and reality lies evil.