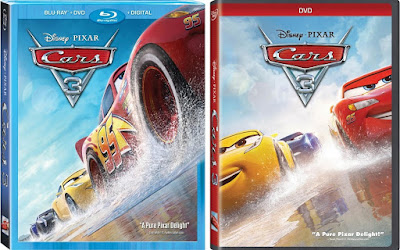 NASCAR community welcomes #95 to a new “Cars 3” exhibit at the NASCAR Hall of Fame as the high-octane hit prepares to cross the finish line on Digital Oct. 24 and Blu-ray Nov. 7


Through May of 2018, visitors to the NASCAR Hall of Fame will get the chance to enjoy an action-packed animation spectacular featuring a full-size, fiberglass replica of Lightning McQueen from “Cars 3,” hands-on kids activities as well as 16 displays that feature renderings, biographies and artifacts from real-life NASCAR personalities who contributed their voices and stories to the movie. Featured legends include Ray Evernham (voice of Ray Reverham), Kyle Petty (voice of Cal Weathers), Jeff Gordon (voice of Jeff Gorvette) and Junior Johnson (voice to Junior “Midnight” Moon), as well as young drivers like Chase Elliott (voice of Chase Racelott), Ryan Blaney (voice of Ryan “Inside” Laney), Daniel Suárez (voice of Danny Swervez) and Bubba Wallace (voice of Bubba Wheelhouse).

“We are honored to showcase the NASCAR stories, characters and locations that inspired the world of ‘Cars,’ in this new special exhibit,” says NASCAR Hall of Fame Executive Director Winston Kelley. “And we’re excited for our friend Lightning McQueen to join us in welcoming guests from around the world, including the next generation of young fans, as they discover the rich history and heritage of NASCAR.”

“When developing ‘Cars 3,’ we consulted and recruited NASCAR greats, from rookie drivers and legends to the voices behind the sport,” says director Brian Fee. “They revealed what happens behind the scenes of racing and helped bring the film’s characters to life. To see them displayed at the NASCAR Hall of Fame—a shrine to the history and heritage of NASCAR—is a real thrill.”
Posted by D.M. Anderson at 1:34 PM