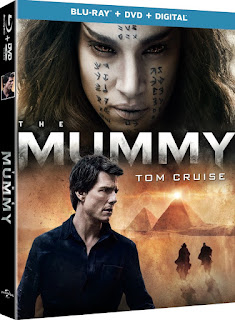 There occasions when I watch a movie that seems to be almost universally despised (by critics and audiences) and wonder if I'm stupid for actually liking it. While Tom Cruise's The Mummy - his name really should be part of the title - didn't quite get Universal's Dark Universe off to the roaring start they were hoping for, I enjoyed the film for what it was.

It sure as hell isn't one of the worst films of the year, like many list-loving critics have smugly declared, a few of whom I suspect had their spears sharpened before they even set foot in the goddamn theater.

There were the negative comparisons to the 1999 blockbuster with Brendan Fraser, along with quips that it's only been nine years since the last film in that franchise. Sure, we've been getting reboots before the corpses of the old movies are cold, but comparatively speaking, aside from the basic premise, this film is completely different in look and tone, achieving a dark vibe that The Mummy (1999) - which was not-so-much a remake of the 1932 classic as an Indiana Jones-type comic/fantasy-adventure - never really attempted. The reboot  film isn't particularly scary, but taking the concept more-or-less seriously was a wise creative choice. We don't need yet-another gag-filled romp through the same material.

Then there were the accusatory complaints of The Mummy being turned into just another Tom Cruise vehicle. To that I say, where have you been lately? For at-least the last decade, all his movies are Tom Cruise vehicles. He's long since he's given-up all pretenses of being anything other than TOM CRUISE, who runs like it hurts, comes equipped with Intens-O-Vision & has no business being in better physical shape than most 20-year-olds. He's really his own little genre and I've grown to appreciate that, which is why most of his recent films a lot of undemanding fun. In fact, they could just as accurately be titled Tom Cruise Battles Aliens, Tom Cruise Dangles from a Plane, Tom Cruise Hunts Hitler, Tom Cruise Rides a Bus to Help Strangers, etc.

At this point, he's simply too Tom Cruisey to be accepted as anything else. Hence, Tom Cruise vs. The Mummy should surprise nobody. If you're unable to accept that, well, there's always the Brendan Fraser movies. Here, Cruise is at his Cruisiest as Tom Cruise Nick Morton, an unscrupulous military man (and too cool to wear an actual uniform) who steals ancient treasures as a side gig. He inadvertently awakens a mummified Egyptian princess (Sofia Boutella), who curses him in order to resurrect an ancient evil God. Also on-board the Tom train are Jake Johnson as his comic relief, Chris (a shameless rip-off of Griffin Dunne's character in An American Werewolf in London), and Jenny (Annabelle Wallis), whose purpose is reacting to Tom doing Tom stuff.

Finally, there's a considerable amount of screen time dedicated to establishing Universal's so-called Dark Universe. Yeah, I'll concede that was a bad idea. Throwing in Dr. Jekyll (Russell Crowe) and brief allusions to other legendary Universal monsters are annoying distractions that smack of a blatant attempt to jump on the Marvel bandwagon with their own ready-made cinematic universe. Worst yet, these elements do absolutely nothing to advance the plot.

Deleted scene from The Mummy

All that being said, The Mummy is exactly the movie I suspected it would be. And maybe that's why I sort-of enjoyed it. The visual effects are decent and there's a lot of violent action (the plane crash sequence during the first act is the best scene in a Tom Cruise movie since the last Mission: Impossible). There's even a decent jump-scare or two for those unaccustomed to them. And even though it pointlessly drops hints of more-to-come in the Dark Universe, the film wisely makes certain this particular Mummy story is wrapped up (no pun intended).