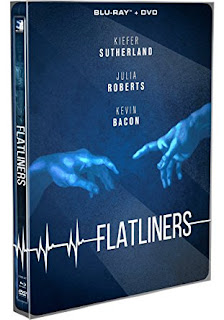 We'll start by stating the obvious: Flatliners is being re-released on Blu-Ray to coincide with the all-new version, which is not a remake, but an actual sequel (!), complete with Kiefer Sutherland. But since it isn't being promoted as one, it's safe to assume some of those looking forward to the new film aren't even aware the original even exists. So it sort-of makes sense to bring the old one out of mothballs.

Speaking of mothballs, Flatliners is 27 years old and an strange choice for sequelizing. Not that the film is bad or anything. It's slick, well-crafted and entertaining. The film was also fairly sizable hit in 1990, especially since Pretty Woman had recently turned Julia Roberts into a bankable star. But like much of director Joel Schumacher's work, it's undoubtedly a product of its time and typical of the type of high-concept horror favored by major studios, featuring a beautiful cast with great hair who normally wouldn't be caught dead dabbling in the genre.

While I've never run into anyone who didn't enjoy it in the moment, Flatliners was never one of those films people felt compelled to revisit. Hence, there's no cult following or nostalgic reverence. No one kicking around in the 90s has later been heard to exclaim, "Finally! Flatliners on Blu-Ray!"

However, I don't think this new disc (a Steelbook edition from Mill Creek Entertainment) is really aimed at them. It's for those who may have actually forgotten all about the film until news of a new one reared its head: "Flatliners? Didn't I see that once? I seem to remember it was pretty good." At least that's what I said when my youngest daughter got excited over the new Flatliners trailer. My reaction piqued her interest in the original, which is arguably the other chief reason for this disc.

So my kids and I watched it together. I had forgotten most of it, including a few sex scenes that briefly made it uncomfortable father-daughter time. Elsewhere, Flatliners is arguably the most 80s movie that wasn't actually released in that decade. Its glossy production, sexy sci-fi/horror concept and hot ensemble cast make it play more like Young Guns & The Lost Boys than any serious exploration of what lies beyond death. And that's just fine, because it's still fairly enjoyable in the moment.

Aside from a DVD and digital copy, this Blu-Ray doesn't boast any extras. None of the previous ones did either, so if you're that one fan who's been waiting for the definitive version, you probably already have it. It's a attractively packaged, though, with new artwork and the text printed on a transparent slipcase.