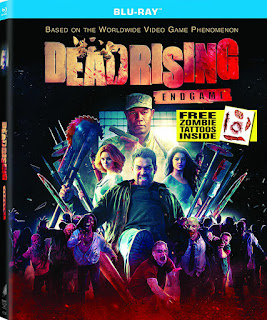 This is a sequel to last year's Dead Rising: Watchtower, a not-half-bad adaptation of the popular zombie game series. Like the original, Dead Rising: Endgame premiered on the Crackle streaming network. While not quite as amusing - or easy to follow – this one is decent enough if you keep your expectations in check.

Endgame begins with the conceit that viewers are already up-to-speed on the events of the first film. Though Watchtower was fairly enjoyable, it wasn't anything that stuck with me long afterwards, so I found myself a little lost. Endgame continues the story two years later and hits the ground running, and even though a few of the returning major characters jogged my memory a bit, it took awhile to remember what the hell they were up to in the first place.

In a nutshell, Jesse Metcalfe is back as investigative reporter Chase Carter (though he acts more like a super-soldier), who returns to the fictional city of East Mission to uncover a nasty plot hatched by General Lyons (Dennis Haysbert). This time, Lyons and the pharmaceutical company that makes Zombrex (which prevents people from turning into ravenous undead) are planning to use the same drug to wipe out over a million people. Chase is also hoping to find Jordan (Keegan Connor Tracy), who was abducted at the end of the first film.

Viewers coming into this movie cold will be completely lost and are probably better off simply sitting back and enjoying the zombie-killing mayhem, which isn't bad for what's essentially direct-to-video fodder. Plus, at no extra charge, there's a glorified cameo by Billy Zane (of course, Billy Zane!) as a sadistic doctor who experiments on both the living and the dead.

One thing Endgame does lack is the same sense of humor that made the original sort of a lowbrow hoot. In that one, Rob Riggle as a gung-ho TV personality would pop-up whenever the story threatened to take itself too seriously. This film could've benefited from another character like him. Still, this sequel boasts a bigger - and bloodier - body count, which ought to count for something when drawing comparisons.