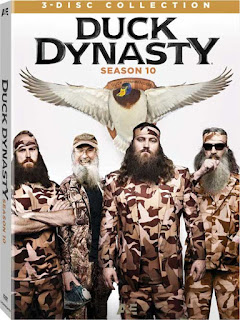 Free Kittens Movie Guide and Lionsgate are giving away a DVD copy!


Catch up with the Robertson family’s wildly hilarious Southern antics when the latest installment of the highest-rated nonfiction series on cable, Duck Dynasty: Season 10, arrives on DVD December 13 from Lionsgate. Chock full of Robertson shenanigans, the season 10 DVD set includes all 14 episodes on 3 DVDs plus never-before-seen-on-TV deleted scenes! Duck Dynasty: Season 10 will keep you in stitches from beginning to end when it arrives on DVD for the suggested retail price of $19.98.

This season, DUCK DYNASTY follows the Robertson family as they conquer new milestones while showcasing their down-home Southern charm. Willie and Korie celebrate their 25th wedding anniversary as well as introduce fans to their newly adopted son, Rowdy. Additionally, Jase’s son Reed surprises his girlfriend with a marriage proposal in New York City, Si goes to court to fight a parking ticket, Sadie checks out colleges, and the family pulls together when a storm hits West Monroe.

TO ENTER: SIMPLY SHOOT US A MESSAGE BY FILLING OUT THE KITTY KONTACT FORM NEAR THE TOP OF OUR SIDEBAR. THE WINNER WILL BE NOTIFIED BY E-MAIL ON 12/19.
Posted by D.M. Anderson at 12:56 PM