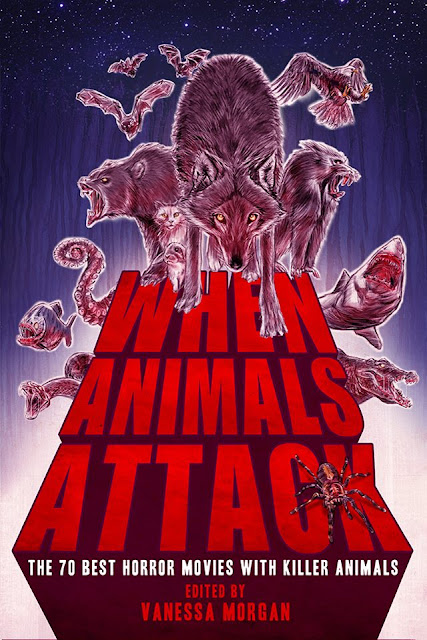 Bug was originally released just days before a certain great white shark came along to scare the bejeezus out of anyone with a pulse. While tens of millions showed up in droves to catch Jaws in the summer of 1975 (and subsequently stayed out of the ocean forever), Bug came and went virtually unnoticed.

Animals with nasty dispositions were suddenly all the rage, and slews of similar films followed in Jaws’ wake (no pun intended): Alligator, Dogs, Squirm, Piranha, Prophecy, Day of the Animals, Mako: The Jaws of Death, Tentacles, Orca, ad nauseum. One of the more successful Jaws rip-offs at the time was Grizzly, a low-budget scare fest released in 1976, with a plot so similar it could almost be considered plagiarism. As an impressionable 12-year-old recently stricken by Jaws fever, I couldn’t resist.

Back then, theaters often offered double features for your ticket, where new movies were accompanied by older ones of the same genre. Hence, Bug was back on the big screen as a co-feature (even if no one was pining for it).

Grizzly didn’t leave much of an impression. It was fun, but mostly because it followed the Jaws formula almost verbatim. Bug, however, was a different story, especially for a kid whose exposure to horror was still fairly limited. The violent deaths in Jaws and Grizzly were suitably graphic for 1970s PG movies, but Bug featured the most disturbing death I’d ever seen up to that point, when one of the title creatures barbecues a cat alive. I felt sickened and appalled as this unfortunate feline howled and thrashed about, trying in vain to detach this burning roach from its head.

Man, I was days getting over that. 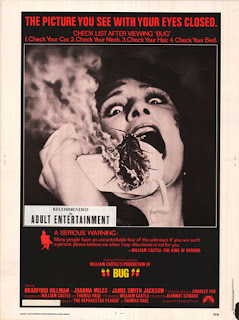 Aside from depriving a kid of a few nights’ sleep as he wondered if they actually killed a cat for the sake of a shot (even today, that scene is pretty unnerving), Bug is mostly notable for being William Castle’s last hurrah as a filmmaker. In the 1950s and 1960s, Castle was one of many prolific producers of low-budget horror schlock. But unlike the Cormans and Arkoffs of the day, he’s best-remembered for the gimmicks he came up with in order to sell more tickets, such as offering fright insurance policies for patrons of Macabre and rigging theater seats with makeshift buzzers for The Tingler. Obviously, this wasn’t high art, but a lot of fun. Castle even managed to accidentally crank out a bonafide classic, The House on Haunted Hill, featuring his most gloriously-goofy gimmick, “Emergo,” in which a wire-tethered, red-eyed skeleton hovered over the audience.

As the 1960s wore on and moviegoers grew more jaded Castle’s tacky tricks seemed kind of quaint, no longer planting butts in seats like they used to. He made one noble stab at respectability (he’s responsible for getting Rosemary’s Baby off the ground, though Paramount refused to let him direct it) before relegating himself to churning out b-movie drive-in fodder – sans gimmicks - for the remainder of his career, with diminishing results. Bug ended up being Castle’s final film, though at this point he was apparently content to write and produce, leaving the directorial chores to Jeannot Szwarc, who’d go on to make a name for himself as the best guy available to helm Jaws 2.
Based on the 1973 novel, The Hephaestus Plague by Thomas Page, Bug begins with an earthquake, which rocks the inhabitants of a small California farming town. As if that isn’t bad enough, a previously undiscovered species of cockroach emerges from the fissures in the Earth. They’re attracted by combustion engines and capable of creating enough internal heat to ignite fires, resulting in the flaming deaths of a few locals and the aforementioned cat. Fortunately, they’re unable to survive very long above ground (something to do with atmospheric pressure). But unfortunately, college professor James Parmiter (Bradford Dillman) decides to play God and crossbreed them with domestic cockroaches, even though one of these firebugs just killed his wife by setting her ablaze. One would think any recently-widowed, right-thinking guy would prefer to ensure these critters’ total extinction. Instead, Parmiter becomes increasingly obsessed and unhinged. Retreating to a cabin, he isolates himself from the outside world in order to conduct his breeding experiments.
Meanwhile, each new generation he breeds becomes smarter and more indestructible, to the point they can gather en masse to literally spell out threatening messages on Parmiter’s wall... a laughable plot twist to any free thinking adult (how the hell did these bugs learn to spell?), but fairly ominous to 12-year-old kids in the 1970s who were generally unaccustomed to noticing plot holes.

Like most horror films prior to Jaws, Bug tries for a dark, oppressive tone with the usual ominous resolution. Whether or not it succeeds is subjective, but for a dated film with a ridiculous premise, budget conscious production values, and “oh-come-on!” story turns, Bug works on a visceral level. It’s unlikely anyone watching this film will walk away thinking they’ve seen something great or groundbreaking, but there are many moments that are suitably unnerving, effectively exploiting our fears of creepy crawlies hiding in places we always dreaded they would. Aided immeasurably by clever camerawork and a weird-ass music score by Charles Fox (mostly known for Killing Me Softly and some TV theme songs), Bug gives us some truly hateful, malevolent creatures.

Additional kudos must go to Bradford Dillman, who was always a decent character actor, though never particularly memorable. In a rare leading role, he portrays Parmiter with over-the-top gusto, treading a fine line between scientific curiosity and total insanity. He’s forced to utter some inane expositional dialogue, but he does it with enough conviction that, at least in the moment, we buy into his delirium.

Bug hasn’t aged particularly well, nor does it display any unique directorial skill. Still, despite some unintentionally humorous moments, the film provides a surprisingly bleak - even nihilistic - suggestion that humankind’s dominance (and arrogance) as a species could be usurped at any given time. Of course, it’s unlikely William Castle had such a lofty message in mind at the time. He apparently still had a bit of the old huckster left in him as well, coming up with an idea to rig theaters with brushes that simulate bugs crawling up the audience’s legs. Unfortunately, this cheeky gimmick never happened. Too bad... it would have been a nifty capper to an endearing legacy.

Finally, here’s a bit of trivia for anyone who grew up in the 1970s... if Parmiter’s kitchen and living room stirs strong feelings of deja vu, that’s because it’s the same iconic set used in all five seasons of The Brady Bunch.

WHEN ANIMALS ATTACK is now available at Amazon US, Amazon UK, Amazon FR
Posted by D.M. Anderson at 1:04 PM