Blu-Ray Review: NOW YOU SEE ME 2 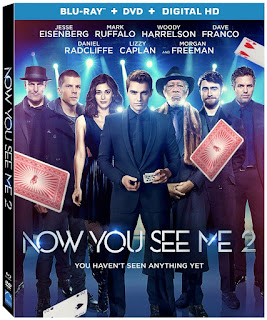 2013's Now You See Me was an enjoyable slight-of-hand caper with a likeable cast and an overall sense of playfulness that made it a pretty easy pill to swallow. Nothing especially mind-blowing or memorable, it was one of those films where you live in-the-moment, then never give it another thought afterwards until you come across it again while channel surfing and go, "Oh yeah, I remember this. What was it about again?" Sort of like the Ocean's 11 films and most of the James Bond franchise.

Since it surprised a lot of folks by becoming a sleeper hit, Now You See Me 2 comes as absolutely no surprise. Like the first, it's light, airy and ultimately forgettable, but it's fun while it lasts. Most of the cast returns, with Lizzy Caplan sort-of taking Isla Fisher's spot as the newest member of The Four Horsemen, that notorious team of renegade magicians whose exploits are now legendary. Daniel Radcliffe is the heavy this time around as Walter, the cocky son of Arthur Tressler from the first film who blackmails the Horsemen into using their skills to attempt another impossible heist...stealing a device that allows its user access to any computer in the world.


Ofcourse, things get a lot more complicated and nothing is quite what it seems. But anyone who saw the first film will expect that, which does tend to diminish some of the suspense, especially since we now know the true identity of Agent Rhodes (Mark Ruffalo). Though the film briefly summarizes key events from the original, it also assumes the audience is already well-acquainted with, not only these characters, but the basic premise of the first film. Now You See Me 2 gets off to a narratively shaky start as it is; for the uninitiated, some of it will be downright perplexing. But it picks up momentum as it goes along and the story arc between both films becomes clearer. The cast fits comfortably back into their roles and it's nice to see them all again. Caplan's character is a welcome addition to the team, though Radcliffe sort-of overdoes it, almost as though he thought he was getting paid to chew the scenery.

While even more far-fetched than the original, Now You See Me 2 more-or-less does the job that's required: provide a few hours of pure escapism. It won't resonate much afterwards, since it's also meant to be enjoyed in-the-moment. If you haven't seen the original in awhile (or at all), you might want to do that first to get the most out of this one.

NOT BAD...LIKE A SECOND HELPING OF CAT CHOW