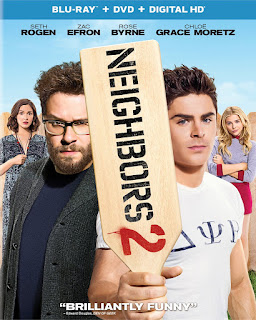 It's been a long time since I've seen a movie completely undone by a single character.

I need to be upfront and admit I have not watched the original Neighbors. Though not particularly a fan of Seth Rogan, I don't avoid his films, but won't go out of my way to see them, either. As for the few of his I kind-of enjoyed, like This is the End and The Night Before, it wasn't necessarily because Rogan was in them. So for I know, Neighbors is hilarious.

That being said, the inevitable sequel, Neighbors 2: Sorority Rising is probably the most irritatingly obnoxious movie I've seen so far this year. The film is almost offensively pandering and aimed at those who think seeing someone vomited on during sex (the very first scene) is inherently funny. Though Rogan shares some of the blame for co-writing this one, meaning its loaded with his usual quota of weed jokes, one has admire his utter fearlessness when putting himself in compromising situations, even if they are seldom particularly funny. But Rogan's performance isn't really the problem here.

The returning cast is also game for another go-round. Like a lot of Rogan-scripted films, the plot is mostly a clothesline to hang various scattershot sketches and gags. While Zac Efron's second turn as the dumb-as-dirt Teddy Sanders is admittedly amusing, especially when trying to grasp the concept of boiling eggs, most of the cast is given little to do but scream or do something calculated to shock the audience into thinking it's funny. There's an air of desperation in most its over-the-top attempts to out-do the original. But the that's not really the problem, either.

This time, Mac and Kelly Radner are trying to sell their home, but while it's in escrow, Scoonie (Chloe Grace Moretz), a college freshman who decides to start an off-campus sorority so she can party with her friends, moves in. The Radners fear the buyers will back out if they know a hard-partying sorority lives next door. When they try to convince Scoonie to tone things down during the 30 day escrow period, she refuses and inexplicably decides to fight back.

And there lies the problem...

Scoonie is a horribly-realized character, suddenly turning from a meek and shy stoner to a brash, in-your-face, conniving, take-no-shit megabitch without any transition. One minute she's quietly trying to make new friends - bonding over their mutual contempt for the sexist fraternity system - the next she and her crew of you-go-girls are defacing Mac's house with bloody tampons, stealing the Radners furniture and selling weed at tailgate parties. As Scoonie, Moretz acts like a seventh grader whose life lessons all came from reality TV. We're not even given any context behind her escalating war on the Radners, especially since their initial request wasn't that unreasonable to begin with.

Most insulting of all, we're later expected to suddenly forgive & forget her reign of terror and sympathize with her when the script decides to shove a heavy-handed message down our throats at the last minute. Perhaps we could have if she weren't so one-dimensionally vindictive throughout the entire film.

I’m sure some viewers will find Scoonie’s antics quite funny simply because they’re brash, gross or involve weed. And while I don’t expect all movies to feature multi-dimensional, well-rounded characters, is it too much to ask to make them somewhat believable? Scoonie’s personality and actions lie so far outside the realm of plausibility that it’s almost insulting we’re expected to find her amusing. And since she has more screen time than every other character but Rogan’s, Neighbors 2 becomes insufferable.

BLEH...LIKE COUGHING UP A HAIRBALL