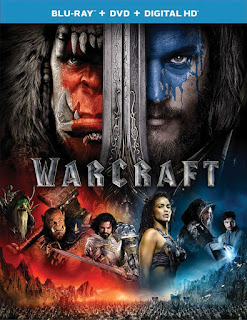 As for the ongoing general consensus that all video game adaptations suck, Warcraft ain't likely to change anyone's mind, but it isn't quite the trainwreck many critics made it out to be.

On one hand, it's overlong, predictable and derivative, loaded with cliched dialogue and dull characters. The action and special effects make you feel like you're watching a video game; at no time are we ever convinced the actors are really interacting with the motion-capture creatures or the digital environment. On the other hand, if you keep your expectations in check, Warcraft, while never truly thrilling or original, is certainly watchable. Though fans of the game will probably get more out of it, the film is visually impressive in a cartoonish sort of way and there's enough hyperactive CGI action to amuse undemanding viewers.

The plot, of course, is perfunctory: Azeroth is invaded by the Orcs (looking like a legion of demonic Shreks), whose own world was destroyed. They're led by Gul'lan, who uses a life-sucking power called 'Fel' to, not only open the portal to begin with, but wipe out his enemies. Ironically, it's this same power that destroyed the Orcs' home world in the first place. This doesn't sit well with one of the clan chiefs, Durotan, who reluctantly sides with the humans in Azeroth to fight Gul'lan before he grows too powerful. Leading the human fight is Lothar (Travis Fimmel) who serves King Wrynn (Dominic Cooper), with help from the Guardian (Ben Foster), who's some sort of sorcerer.


It's a pretty straightforward story and it earns no points for originality, but that's not really a deal-breaker. When was the last time you saw a truly unique fantasy film, anyway? There are still some fun moments to be had and the few bits of intentional humor are pretty amusing (the film could have used more of them).  Less forgivable is the total lack of interesting characters. None of the human heroes display much personality and the Orcs all look and sound the same. There's something seriously wrong when the one and only Clancy Brown's voice is indistinguishable from the other Orcs.

The film is optimistically left open-ended, indicating that Universal was probably convinced they had a massive hit on their hands. God knows gamers had been anticipating a Warcraft movie for the past decade. Apparently, though, this wasn’t what they had in-mind. But it isn’t that bad and might actually play better at home, where our expectations are generally lower.

Of course, that might be faint praise for a film with a $160 million price tag.