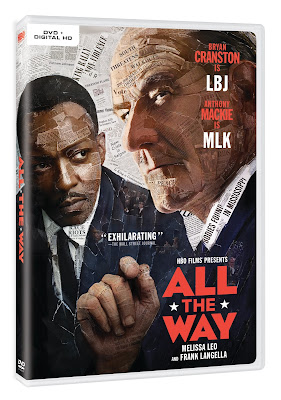 TO WIN: Simply, shoot us a message using the KITTY KONTACT FORM on our sidebar, and a winner will be randomly chosen.

Hailed as “dramatically dazzling” (Baltimore Sun) and “powerful” (Chicago Sun-Times), All the Way was nominated for eight 2016 Emmy Awards® including Outstanding Television Movie, Outstanding Lead Actor in a Limited Series or Movie (Bryan Cranston, who reprises his Tony® Award winning role). The film follows LBJ during his early administration, as he stakes his presidency on what would be an historic, unprecedented Civil Rights Act. Johnson finds himself caught between the moral imperative of Dr. Martin Luther King, Jr. and the expectations of the southern Democratic Party leaders who brought Johnson to power. As King battles to press Johnson while controlling more radical elements of the Civil Rights movement, Johnson navigates the bill through Congress, winning a landslide victory against Barry Goldwater, but causing the South to defect from the Democratic Party.