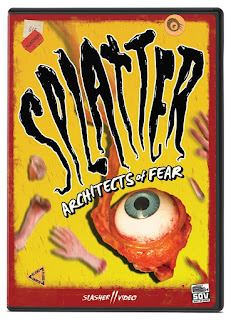 Those expecting any insights from the Savinis, Bakers and Nicoteros of the world are advised to look elsewhere.

Splatter: Architects of Fear is a 1986 micro-budget, shot-on-video ‘documentary’ purporting to be a behind-the-scenes look at how various gore scenes were accomplished during the making of a cheesy, sleazy post-apocalypse movie involving a war between sexy Amazon women and mutant male zombies. Only such a movie doesn’t actually exist. The extraordinarily cheap, badly-performed scenes were made for the purpose of this film (which appears to have been entirely shot in an abandoned werehouse).

We see one gory death scene after another (along with a ton of gratuitous female nudity), each followed by a segment which show how a bunch of no-name effects artists pulled it off. This is repeated throughout the disc’s running time, along with pretentious narration about the nature of fear and how these make-up artists are masters of their craft. However, these are not masters; you'd likely get the same results by handing a bunch of teenage gorehounds a video camera, gallons of corn syrup, red food coloring and buckets of meat scraps. Interspersed among these scenes are idiotic moments featuring a character named ‘Fang,’ a disfigured ghoul who prowls the set in a desperate attempt to provide comic relief (which is all painfully unfunny).

But apparently, this piece of junk actually has a cult following, VHS geeks who truly embrace the shot-on-video crap made during the 1980s. Over the years, Splatter has become a highly-sought treasure to own on DVD. Well guys...here’s your chance, and you’re welcome to it.

HISS! FOR MASOCHISTS ONLY