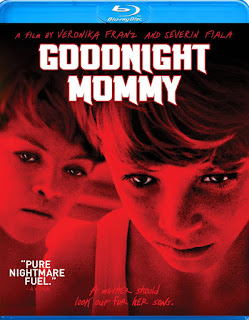 That old saying, the journey is more important than the destination, certainly applies to movies like Goodnight Mommy.

The journey in this Austrian horror film is certainly a strange one. Two twin boys' mother returns home after a horrific accident which has left her face covered in bandages. Her subsequent odd - almost abusive - behavior has them suspecting she's not their real mother at all, and they take measures to find out the truth. Goodnight Mommy is a moody, surreal film with a lot of deliberately ambiguous moments which have us wondering who the true villain is, and suggesting a big plot reveal that will tie everything together. For the most part, though the journey isn't necessarily a fun one, it's fairly fascinating, anchored by a couple of frankly-unnerving performances by Lukas & Elias Schwartz as the twins.

Despite all that, Goodnight Mommy is never dull (the worst sin a horror film can commit). Writer/directors Veronika Franz & Severin Fiala manage to instill a good amount of dread in the viewer with a minimum of exposition, relying on the creepy imagery and characters' actions to propel the story forward. While there aren't a lot of surprises, it's a journey worth taking at least once.