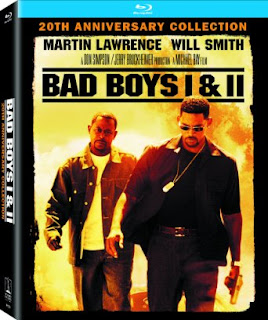 This action-comedy franchise didn't exactly re-invent the wheel, but definitely struck a chord with undemanding action-comedy fans happy to see yet another take the tried-and-true Lethal Weapon formula. Both films have been remastered in 4K and packaged together for this 20th Anniversary Blu-Ray collection (has it already been that long?).

Looking back at both of these films, there's a before-and-after dichotomy that's rather interesting.

The original Bad Boys (while not remotely original) coasted on the appeal of its stars (Martin Lawrence & Will Smith). Both were popular on television, but had not yet proven to be box office draws. Bad Boys changed all that, most likely because of their chemistry together, which went a long way in making the audience forget there isn't much of a story here. Personally, I never thought Lawrence was the least bit funny, and this film didn't change my mind, but he and Smith play off each other pretty well. While their banter is seldom laugh-out-loud funny, it's sometimes mildly amusing.

Most significantly, Bad Boys is the movie which unleashed director Michael Bay on the world. As his first feature film, he trucks out the visual fireworks and hyperactive style he first-honed making music videos, but not to the overwhelming extreme that would soon become his dubious trademark. For the most part, the action is deftly handled and exciting, another factor which helps us forget the plot itself is perfunctory.


Fast forward to 2003, and what a difference eight years makes. By now, Will Smith is one of the biggest stars in the world, with an ego to match. There isn't a single scene in Bad Boys II when he isn't depicted as the coolest dude to ever walk the Earth. Lawrence is still totally unfunny, and the banter between he and his now-much-bigger co-star feels completely forced...almost desperate in its attempt to make us laugh. Some scenes are embarrassingly bad and serve zero narrative purpose, such as the entire mortuary scene involving a female corpse's breasts, as well as these two characters' verbal assault on a 15 year old kid dating Lawrence's daughter.

Worst of all, this is post-Armageddon Michael Bay at the helm, now in full !MICHAEL BAY! mode, ready and willing to forgo what loosely resembles a story in favor of more volume, more boobs, more car chases, more explosions, more seizure-inducing editing, with a deadly-long 147 minute running time. Ultimately, Bad Boys II is a cold, cynical Hollywood product which counts on brand name recognition and audience goodwill to carry it over. Why Smith agreed to do this but later said no to an Independence Day sequel is beyond me.

On the plus side, this is the first time Bad Boys II has ever been available on Blu-Ray, so if you are a fan, you'll be happy to know it's never looked or sound better on home video. It must be said, however, that all of the bonus features for both movies have already been included on previous releases. Despite being the 20th Anniversary of the original Bad Boys, there are no retrospective documentaries or interviews.

BAD BOYS (Same as the previous Blu-Ray release)
BAD BOYS II (Though the film is new to Blu-Ray, the bonus features are the same as the DVD release)

NOT BAD...FOR US, BAD BOYS II IS TRULY HISS-WORTHY, BUT FANS WILL BE HAPPY TO HAVE IT ON BLU-RAY