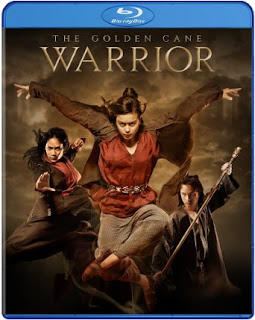 I'll say this much...if movies were postcards, The Golden Cane Warrior will make you wish you were there. Director Ifa Isfansyah is definitely in love with his Indonesian countryside, top-loading the film with gorgeous and colorful images of the hills, sky, forest and sea. Hence, this is one beautiful looking Blu-Ray.

The story he drops into this Asian paradise, however, is hit and miss. An aging female warrior and head of the Golden Cane House, Cempaka, has been training four young apprentices, three of whom were the children of former rivals she's killed. The Golden Cane apparently renders its owner extraordinarily powerful, providing they know how to use it. After she bestows the cane to young Dara, Biru & Gerhana, feeling slighted, poison Cempaka, steal the cane and frame Dara for the murder. Dara is rescued by an enigmatic stranger, Elang, and finds brief sanctuary in his village. Meanwhile, Biru & Gerhana murder the leader of the nearby Red Wing House and use the cane's legendary status to rule the region with an iron fist, even though neither knows the 'ultimate move' (a martial arts skill required to be worthy of having the Golden Cane). Of course, it turns out somebody else does...in fact a couple of somebodies we've already met, who team-up for a showdown against these two tyrants.


It's a serviceable story, with no real surprises, featuring fight scenes that are kinetic and rousing (the climax in particular). The problem is, for an action movie, those scenes are relatively few and far between, and pretty-much regulated to stick fighting (or whatever it's actually called). The long stretches in-between consist of a lot of exposition - more telling than showing - along with a few training montages and lovingly-shot Indonesian scenery. There are numerous moments when the viewer may be initially impressed with how great everything looks, but will soon get impatient for the mayhem to commence.