DIRTY MARY, CRAZY LARRY and the Fifth Nature of Conflict 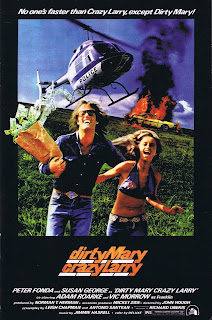 While I try to never provide spoilers in an essay or review, in this case it’s a necessary evil. I apologize in advance...

Not too long ago, I was watching the entire Back to the Future trilogy for the umpteenth time. I've always loved that franchise and enjoy a sitting down for a marathon of all three movies every couple of years or so. I often catch some small detail I never noticed before, such as the Roger Rabbit doll in the display window of a 2015 antique shop in Back to the Future Part II (a nod to director Robert Zemeckis' previous film). But sometimes you can watch a beloved movie too much and eventually spot something that suddenly doesn't quite jibe with your inherent common sense.

Unless a film totally insults my intelligence, I generally don't look for lapses in logic, and the best-made movies have a knack for glossing over pesky details that, in the real world, aren't remotely plausible. Still...logistical flaws are eventually bound to surface. In this case, I'm referring to one of the final scenes in Back to the Future Part III, when Marty McFly (Michael J. Fox) returns to his own time and manages to leap out of his DeLorean mere seconds before it's smashed to bits by a speeding freight train. Not only is the time machine completely destroyed, the train rolls on without even slowing down.

Either that train is a runaway or it's engineered by a homicidal maniac, because any sane individual at the controls would have hit the brakes the second they nailed something as big as a DeLorean. Granted, trains are massive iron behemoths capable of obliterating damn-near anything in their way, but you'd think anyone occupying the lead engine, even if they weren't looking out the window, would've at-least felt something. Hell, I recently noticed the audible thump of an unfortunate squirrel caught under my wheels during a morning commute. Though I know virtually nothing about the rules and regulations of engineering, I'm pretty damn certain that anyone who keeps choo-chooing along after taking-out a car has no business being in control of a 200 ton locomotive.

So while wrapping up this most recent Back to the Future marathon, I said to my wife, "Hey, how come the train doesn't ever stop? It just obliterated a car."

She shrugged indifferently, either because she was too preoccupied with Facebook or because such a detail doesn't really render the Back to the Future trilogy any less awesome. We're so caught-up in the conclusion of this labyrinthine time-travel tale that we simply never notice that the 'Oblivious Train' development is just a standard, time-honored movie trope.

Only then did I recall similar scenes in other films, such as...

Blue Thunder, where police chopper pilot Frank Murphy deliberately lands the title machine directly in front of a moving train, which literally blows it to pieces. Not only do the locomotive engineers survive the fiery impact unbarbecued, the train continues unabated throughout the end credits.

Then there's Final Destination, in which a speeding train wipes out a stalled car on the tracks, in addition to beheading one of the main characters. Still, the train kept a rollin’ (all night long).

Or how about the subway platform fight scene in The Warriors? A gang member is thrown onto the tracks, just before a train comes along to pancake him without even stopping at the platform to let more passengers onboard. Who the hell's driving the damn thing, Stevie Wonder?

And lets not forget the classic bridge-crossing scene in Stand by Me, in which four boys are halfway across before being forced to run in terror from a steam-driven locomotive right behind them. It makes no attempt to stop or even slow down (though it's moving slow enough to do so). Two kids barely make it, leaping off the bridge as the train chugs onward, oblivious to whether or not they’re okay.

I could go on, but you get the point. Unless they are central to the story, trains are depicted as unstoppable, mindless entities, indifferent to the havoc they wreak...like a giant Bill O’Reilly on wheels.

Dating back to classic Greek literature, there have always been four basic forms of narrative conflict: Man vs. Man, Man vs. Self, Man vs. Society and Man vs. Nature. Nearly every book, movie or play you’d care to name establishes one or more of these conflicts in order to tell its story. With the exception of Man vs. Self, the conflict is external, that of the protagonist forced to overcome an obstacle outside himself. Internal conflict is the biggest bitch (which most-fucked with my head in college literature classes) because the protagonist is usually at-odds with his own marbles.

But I have to wonder what those nutty Greeks would have thought about the nature of conflict if the Oblivious Train was around back then. As an antagonist, the Oblivious Train doesn’t fall under any previously established category. They might have declared Man vs. Train to be the fifth, most nihilistic, nature of conflict, depicting the utter futility of a character’s will to overcome an obstacle.

Why? Because sometimes, out of the blue, shit happens. The Oblivious Train is the result of nothing more than bad timing, yet ultimately a game ender. It’s also a supreme example of both external and internal conflict: external because it’s an outside force, internal because it'll likely bust you apart like a pinata if you happen to be in its way.

Man vs. Train is the ultimate metaphor for ‘shit happens,’ whether a character deserves it or not.


As a superlative example, Dirty Mary, Crazy Larry is one of countless car chase movies that were hugely popular on the drive-in circuit in the 1970s. Like most films of its ilk, we’re expected to root for the guy behind the wheel being pursued by police. In this case it's Peter Fonda, still milking his anti-hero status established in Easy Rider. He plays Larry Rayder, a wannabe NASCAR driver who plans to finance a race team by robbing a supermarket with the help of his mechanic, Deke (Adam Roarke). Tagging along is Mary (Susan George), a thrill-seeking groupie who Larry’s been sleeping with. Pursuing the trio is an obsessive sheriff (Vic Morrow as a less comedic version of Buford T. Justice in the Smokey and the Bandit films), thwarted at every turn by these fugitives.

Dirty Mary, Crazy Larry eventually became a minor cult classic, partially because it earned Quentin Tarantino’s seal of approval, but also because it’s very well made for high-speed drive-in fodder, loaded with expertly-choreographed chases and stunts. By this time, Fonda had the whole anti-establishment schtick down pat...a total rebel while still remaining somewhat likeable. George's character, despite being complete white trash, oozed a sleazy brand of sex appeal much-appreciated by us impressionable young boys in the audience (I think I was 13 or 14 when I first watched it as the second half of a double bill).

But what ultimately renders Dirty Mary, Crazy Larry especially memorable is the ending. Despite the protagonists being criminals, we find ourselves rooting for them through one thrilling car chase after another. It’s 90 minutes of silly audience-rousing amusement right up until the final scene, when a cinematic sucker-punch completely negates all the fun we’ve been having. After a particularly harrowing car/helicopter chase through a walnut grove (the highlight of the film), our three protagonists manage to elude the police and emerge victorious with their ill-gotten supermarket bounty. As they’re speeding down the road, laughing in celebration, their car is nailed at a railroad crossing by a speeding freight train. The car explodes and they’re instantly killed. The Oblivious Train continues onward as the end credits roll.

Sitting in the audience back in the 70s, we were stunned. This train (with absolutely no foreshadowing) came out of nowhere and completely changed the entire tone of the film in a split second. Instead of exiting the theater cheered by Peter Fonda’s stick-it-to-the-man mantra, we’re cruelly reminded that, sometimes, shit happens. There are random elements beyond our control that simply don’t give a damn about man’s struggle with nature, society or himself.

Perhaps that’s why, in movies, the Oblivious Train always keeps rolling down the tracks even after killing our protagonists or creating fiery destruction. Not-so-much a logistical story flaw, maybe the narrative nature of Man vs. Train is meant to serve as a metaphorical (and nihilistic) reminder that even an individual’s most epic struggle, internally or externally, can be abruptly altered by a random twist of fate.