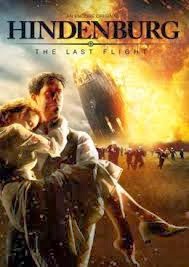 I’m pretty certain everything I need to know about the Hindenburg disaster I learned  from a Led Zeppelin album cover.

As astounding as images are of that German airship going down (this might be the first disaster caught on film as it was unfolding), that’s more-or-less where the story ends. Unlike the Titanic, which took hours to sink and has since-provided filmmakers worldwide with plenty of dramatic and speculative fodder, that big German balloon crashed and burned in less than a minute.

So how the hell do you make a movie out of that, much less a miniseries?

I guess you play the conspiracy theory card to pad things out. This was first tried in the 70s when Robert Wise collected a paycheck to direct The Hindenburg, which combined the soap opera melodrama of Airport with long-held theories that the disaster was the result of sabotage. An obvious attempt to cash in on the disaster craze, The Hindenburg isn’t the worst disaster film of the 70s (that medal goes to Beyond the Poseidon Adventure), but it’s easily the most boring. Even it’s climax simply recycles old newsreel footage, which was already as familiar to everyone as the Zapruter film.

Now here’s Hindenburg: The Last Flight, a German-produced miniseries (which first aired in the U.S. on Encore). Presenting yet-another sabotage scenario, this fictionalized account of the disaster is even longer. But ironically, it’s a bit more interesting, faster moving and just-barely makes its three hour running time worth sitting through. Sure, the usual disaster movie subplots are there, including characters whose presence make no sense and have zero impact on the plot (especially an antagonistic actor whom we're initially led to believe is part of a conspiracy), but it does stay fairly focused on its loony theory, which has an American fuel company (headed by Stacy Keach, the most recognizable cast member) deliberately sabotaging the ship to encourage the government to end a helium embargo on Germany.

The movie feels very padded-out at times, with subplots involving Jewish refugees and a love story which seems shoe-horned in. You could trim an hour from its running time and still get a complete story. A lot of this story is really bad, loaded with plot holes and/or subplots which peter out into nothing. In addition, many of the performances are over-the-top (especially most of the main characters), and some of the atrocious dialogue will have viewers shaking their heads while asking “Where the hell did that shit come from?” And don’t get me started on the wildly out-of-place alt-rock music themes book-ending the movie during the opening and closing credits.

But despite all that, Hindenburg: The Last Flight is fairly watchable. The story is crazily-intricate enough to maintain interest for a few hours (even as we’re rolling our eyes), and production-wise, things look pretty good for a made-for-TV film. Scenes of Hindenburg in-flight look terrific and the climactic disaster is suitably fiery and spectacular (not-to-mention stretched-out much longer than the actual event). The coda feels more drawn-out than it should be, but there’s a good chance most folks will walk away from this disc feeling relatively entertained.

And you never know…the next time you truck out your old copy of Led Zeppelin’s first album, maybe there’s a chance you’ll suspect there’s more to the story than fiery mayhem.