THE PURGE and the Sixth Stupidity 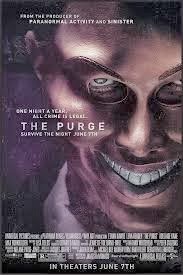 There's this guy named Howard Gardner, a developmental psychologist best-known for his 'theory of multiple intelligences,' first proposed in his book, Frames of Mind. I won't go into boring detail (as a teacher, I've endured all of it for you), but in a nutshell, his theory suggests there are several methods of gauging one's individual intelligence, since not everyone processes information the same way. There are visual learners, verbal/linguistic learners, kinesthetic learners, rhythmic/harmonic learners, etc. In other words, not all intelligence can be determined through a single test. While I agree with that, educators around the world embraced his theory like an amorous dog on a human leg, allowing them to attach at least one kind of intelligence to every kid in the classroom, no matter how fucking stupid they are.

But as Leonard McCoy once said, “I know engineers, they love to change things.” The same goes for educators' approach to their profession, meaning once the initial luster wore off of Gardner's theory, it was tossed aside in favor of a new flavor. In fact, I haven't heard Gardner's name mentioned at a workshop, class or training for at least ten years. Too bad, actually, because while I think he went a tad overboard with his everyone-board-the-smart-train philosophy, his theory has merit. I've had countless students who totally brainfart on state tests, yet know how to demonstrate their learning through a creative project or hands-on activity.

Still, as an educator, I know it's not professional to say this, but the fact remains some kids are just plain fucking dumb, no matter how many different ways you give them to prove otherwise (and no, I'm not talking about children with true developmental disabilities). And like Gardner's theory of multiple intelligences, there are multiple levels of stupidity, which I will outline here:
There's also a sixth level of stupidity unrelated to academics or real-world scenarios, but just as prevalent. We're talking about Expositional Stupidity. Unike the others, Expositional Stupidity doesn't reveal itself in the classroom. It is related to plot development on the big screen, when a movie's story depends on a character doing something so phenomenally dumb that it puts everyone in jeopardy. This type of stupidity is not regulated to kids, though. Where would movies like Jaws or Die Hard be without such dumbasses as Mayor Vaughn or Deputy Cheif Robinson mucking things up? Would disaster movies be nearly as much fun without an obligatory butthead whose dumb decisions usually end in his death? And it goes without saying that, without Expositional Stupidity, most slasher movies would be 20 minutes long with no death scenes.

Adult characters who demonstrate Expositional Stupidity are always villains, argumentative boobs or cannon fodder, and we generally want to see them get what's coming to them. But kids? That's a different story. In life, we tend to forgive a child's lapse in common sense simply because making dumb decisions is their job. In movies, we are almost as forgiving, and countless movies over the years have relied on the time-honored trope of throwing in an expositionally-stupid child into the mix, who puts himself and others in peril by doing something that would have audiences screaming for his head if he were a grown-up. And it doesn't seem to matter whether or not said-child is an obnoxious asshole (as in The Last Boy Scout).

The expositionally-stupid child character is a somewhat-lazy plot device which accomplishes two things: 1) His or her actions adds a twist to the story, and 2) It creates suspense because most of us don't want to see kids die (even if they deserve it). The Swarm immediately comes to-mind. In this one, a kid tries to avenge the death of his parents by firebombing the bees that killed them, but this just pisses 'em off enough to attack an entire town. Later, the kid is on his death bed, and even though the little bastard is responsible for hundreds of deaths, the scene is accompanied by weepy music and a grieving Michael Caine. In other words, fuck all those who died horribly because this kid was angry. On the other hand, The Swarm is one of the precious few disaster movies that had the balls to kill its expositionally-stupid child character.

But the most blatant example of expositionally-stupid children can be found in The Purge, where the entire plot relies on the utter idiocy of its child characters (though the adults aren't exactly scholars either).

It's probably important to state I really liked The Purge, though a lot of critics and audiences didn't. Despite its plot holes and heavy-handed attempts at social commentary, it's a rousing and fun way to kill 90 minutes. But even if you're one of the naysayers, you gotta admit the concept itself is absolutely brilliant: In the near future, crime is almost non-existent because, once a year, everything (including murder) is legal for 12 hours, allowing people to get all their violent impulses out of their systems. As a struggling writer, I found myself thinking, “Why the hell didn't I think of that?” It reminded me of the perfect simplicity of Shirley Jackson's classic story, “The Lottery.”

Does the movie itself live up to the promise of its concept? No, not really. Would I have done something different with the initial idea? Yeah, probably, and the first thing I would do is get rid of the expositionally-stupid kids...

In the film, Ethan Hawke is James Sandin, a well-to-do family man who with a hugely successful career selling home security systems to protect families from attack during this annual night of mayhem. On the night of The Purge, he seals himself and his family inside their house; doors and windows are fortified with steel shutters and cameras monitor the property. Everyone seems to be safe and secure, until his two kids demonstrate the most unbelievable Expositional Stupidity I've ever seen...

Kid one is Zoey, your typical bitchy teenager, so enamored with dry-humping her boyfriend that she routinely lets him creep into her bedroom window so they can grope each other. He lets himself into the house just before The Purge commences (meaning he's trapped there), telling Zoey he plans to reason with her dad regarding their relationship. However, what he really wants to do is blow Dad away on the only night it's legal, resulting in a gunfight which has little baring on the plot, but forces Zoey to run and hide in order to be rescued later. Kid two is Charlie, a bizarre little boy with an emo haircut, technical smarts and a concern over the morality of The Purge, which he demonstrates when he foolishly opens the front door to allow a nameless vagrant into the house. This brings the wrath of a mob of masked marauders intent on slaughtering the man, and threaten to kill Sandin's whole family unless he gives the stranger to them.

(Spoiler Alert!) Yeah...thanks kids. We could've simply waited everything out like I wanted to, but because of your hormones or sudden sense of morality, I'm gonna die trying to save your dumb asses, even though you haven't given me a single reason I should even like you.

I'd like to think there are few kids in reality as utterly stupid as Zoey & Charlie.

On another side note, I'm still not sure why these home-invaders are so hell-bent on killing this random homeless guy, since it is made obviously-apparent there are plenty of similarly-unfortunate folks running around. Holding out for this one seems like a tragic waste of Purge time.

The Purge doesn't live up to its ingenious concept, and wouldn't even exist without the Expositional Stupidity of children, which we should be thankful for. No, we are never worried whether or not said-kids will live or die. And yeah, maybe a few more script-development meetings could have rendered The Purge into something darker, smarter and satirical. But considering the state of dumbed-down, mall-rat horror today, I'll take it.
Posted by D.M. Anderson at 8:10 PM