Blu-Ray Review: ALL IS LOST 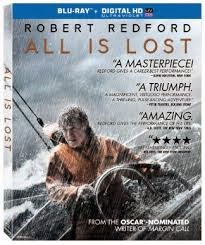 Being a boat owner sucks.

I already knew this because I bought a Wave Runner several years ago. Sure, the things are fun when they're running, but even the smallest problem with my precious toy renders it inoperable until it gets fixed. All it took were a few rocks sucked into the impeller and my boat became a $10,000 lawn ornament for the remainder of the summer. If you think getting your car repaired is expensive, try making your watercraft drivable again. Hell, even little problems will suck your wallet dry.

Watching Robert Redford trying in vain to save his sailboat in All is Lost simply hammered that fact home. In the opening scene, when a stray cargo container tears a hole in his hull, the first thing I thought was, Man, that's gonna cost a pretty penny. As a fellow boat-owner whose own personal watercraft spends far more time on the driveway than the water, I could empathize.

But at least I had buddies to tow me and my busted boat back to shore. Redford is all by himself out in the middle of the Indian Ocean. The only thing worse than wrecking your boat is doing it all alone in the middle of nowhere, something All is Lost conveys extremely well from the very first scene. We immediately feel the enormity of his situation, and events only become increasingly perilous from there. The remainder of the film focuses exclusively on Redford's character's attempts to survive.

I say 'Redford's character' because he is never named. In fact, we learn nothing about him. For all we know, he's a cheating douchebag going through a mid-life crisis by boating to a tropical paradise teaming with naked female natives, but all we're given to work with is an old man trying desperately to stay alive while nature does its damndest to kill him.

A movie like this shouldn't work as well as it does. Every word of dialogue could fit on a 3 x 5 notecard. While dialogue isn't always necessary for character development, there's no metaphoric symbolism either, nor visual images of what he stands to lose. Yet All is Lost makes us care about this guy anyway; we experience his obstacles, tiny victories and hope-crushing failures right along with him.

Much of the credit for that has to go to Redford because his performance is nothing short of revelatory. Sure, we  respect him as a director, but as an actor, he was always best at being Robert Redford. This is the first film I've seen him in where he truly diappeared into the character. Despite no dialogue or characterization, what I saw (and felt) was an old man thrown into a situation in which he'd likely die, and even though I knew nothing about the the guy, I was truly rooting for him to live.

Kudos have to go to J.C. Chandor for his script (32 pages long) and vastly-underappreciated direction. This could have been either a pretentious art film or an overbearing “actor's showcase”, yet he draws a fine line between both. Yeah, it's artistic, but also audience-rousing without dumbing anything down. In addition, this is a great-looking movie, with outstanding cinematography and visual effects, neither of which call attention to themselves other than to serve the story.

All is Lost is one of those movies which defies genre conventions, yet manages to be a thrilling and emotional ride anyway. It also features Redford's best performance of his entire career, making it a shame he didn't even get an Oscar nomination. And despite the story's simplicity, this character's plight is well-worth revisiting. I've since watched it again and caught subtle things I didn't notice the first time.

But it also makes me want to sell my boat.