Blu-Ray Review: BATTLE OF THE DAMNED 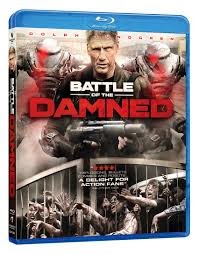 Welcome to the Kingdom of Low Expectations, where hopes are seldom high, the intellect is never challenged and most films end up on DVD shelves before anyone's even heard of them. In this world, we're content if our maladjusted kids manage to graduate with straight Cs, our tax refund allows us to fill the gas tank with enough left to score a case of Busch Light and we're delighted when our cable service offers a free Cinemax weekend (so we can catch some late night soft-core fun).

Living here is like being a loyal Cleveland Browns fan.

This land is ruled by King Stallone. Sitting at his Round Table are Sir Norris, Sir Seagall, Sir Snipes, Sir Lundgren and every WWE wannabe action star whose last name isn't Johnson (and if he doesn't pull his head out of his ass, Sir Willis is soon to join this regal group). These noble knights once served a greater king, but have since-been banished to the Kingdom of Low Expectations, a realm whose subjects scoff at the idea of paying full theater prices to see them battle, but are more-than-willing to take a chance to enjoy their skills on home video.

Rescued by King Stallone, who gave him a role in The Expendables, Sir Lundgren (Dolph, to you) has actually exceeded our expectations. While Lundgren will always be known as Drago in Rocky IV to most foreigners, in the Kingdom of Low Expectations, he's emerged as the land's greatest knight, appearing in such low-rent fun as Universal Soldier: Day of Reckoning and Ambushed, films which most folks would be ashamed to admit were pretty entertaining. Add Battle of the Damned to that list, an unfortunately-titled zombie flick that sounds more like a pay-per-view wrestling match.

A low budget mash-up of 28 Days Later and Escape from New York (with a bit of the video game, The Last of Us, thrown in), Battle of the Damned stars Lundgren as Max Gatling (how awesome is that name?), a mercenary who accepts a mission to rescue a young girl from a quarantined city that's teaming with a virus which has turned the population into vicious, flesh-eating zombies. He finds the girl (a defiant & feisty emo kid who can kick some serious ass herself), along with a half-dozen other survivors (the budget probably couldn't afford any more). They've managed to stay alive in this town thanks to Duke, an arrogant megalomaniac who questions Gatling's mission. Sounds like straight-forward enough action, doesn't it?

But wait! Aside from a few plot twists revealing who's who, I forgot to mention the killer robots who suddenly show up in the middle of the movie! They are sloppily rendered through CGI, but not only do they cause most of the gory mayhem, they provide a surprising amount of the movie's comic relief.

Speaking of which, Battle of the Damned is often intentionally funny, something folks in the Kingdom of Low Expectations aren't used to. Sure, the cast mostly plays it straight, but the movie has enough one liners and amusing dialogue that, while not as clever as anything in Zombieland, has us thinking its makers were just-as-aware of the absurdity of the story. Why else would you throw in killer robots?

For what's essentially a zombie movie, it's pretty light in the gore department (mostly rendered through CGI), but some of the action scenes are fairly imaginative, most notably the scene in which Sir Lundgren is forced to battle dozens of undead while chained to a lamppost.

Is Battle of the Damned a good movie? The answer is no. But is it a fun movie? As someone who often visits the Kingdom of Low Expectations, my answer is an unqualified yes. It is thoroughly enjoyable, delivering just what one would expect from a film with Sir Lundgren as its star. In fact, this direct-to-DVD flick is a lot more fun than King Stallone's own Bullet to the Head, which a few unfortunate souls paid to see in theaters.

EXTRAS:
BATTLING THE DAMNED – Basically a five minute montage of films clips and behind-the-scenes footage, with no interviews or insights on production. None are probably needed either.