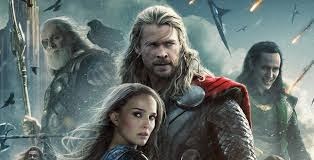 Marvel’s Thor: The Dark World continues the adventures of Thor, the Mighty Avenger, as he battles to save Earth and all the Nine Realms from a shadowy enemy that predates the universe itself. In the aftermath of Marvel’s The Avengers, Thor (Chris Hemsworth) fights to restore order across the cosmos… But an ancient race led by the vengeful Malekith (Christopher Eccleston) returns to plunge the universe back into darkness. Faced with an enemy that even Odin (Anthony Hopkins) and Asgard cannot withstand, Thor must embark on his most perilous and personal journey yet, one that will reunite him with Jane Foster (Natalie Portman) and force him to sacrifice everything to save us all.

With the Blu-ray and DVD of Marvel’s Thor: The Dark World about to be released, we chat to actress Natalie Portman to find out more…

Kenneth Branagh famously directed the first Thor movie. What was the biggest different between working with him and Alan Taylor, who is the director of Marvel’s Thor: The Dark World?
Ken was phenomenal to work with, and he was so much fun. I think a big part of the reason that so many of us wanted to get involved with this franchise was because it was an unusual and cool idea to have someone like Kenneth Branagh make a movie like this. Alan Taylor is wonderful in a very different way. He has a PhD in Philosophy, so we would be talking about a scene and he would say something like, “This can’t happen; it’s not Hegelian.” My response would be, “I don’t know what you are talking about!” [Laughs] Alan came at the movie from such a different angle, and he has such expertise in creating these fantastic universes from having worked on things like Game Of Thrones. It was really interesting working with both of them. They are both wonderful directors.

Marvel’s Thor: The Dark World producer Kevin Feige says that your character – Jane Foster – is a fish out of water in the movie. Would you agree?
Jane Foster doesn’t fit in. She’s a short brunette in a world of blonde Amazons; in a place where magic is reality and there’s all of this advanced technology that she’s never seen. The people speak like they are in a Shakespeare play, but she’s like a character from Bill And Ted, walking around saying, “Like, what’s going on dude?” It’s fun.

How would you describe Jane Foster’s relationship with Thor in the second movie?
Thor came to Earth to help The Avengers save New York, but he never called to say, “Hey, what’s up Jane?” So when they first reunite in the second movie, she is pretty angry with him. It’s a funny situation that many of us can relate to; when the guy that stole your heart reappears. They start out at quite a contentious place.

How much danger does Jane Foster face in Marvel’s Thor: The Dark World?
Jane is in quite a bad situation. There’s a very mysterious weapon that the enemy is using on her, so part of Thor’s quest to save Earth is also about saving Jane, which is something that Odin [played by Sir Anthony Hopkins] objects to.

Can you talk about the relationship between Jane and Thor’s father, Odin?
Jane is clearly a thorn in Odin’s side, but it was such a great honor to get to work with Sir Anthony. He’s the loveliest, loveliest man.

Was it fun to be yelled at by Sir Anthony Hopkins?
Oh yes! [Laughs] I will take anything from Sir Anthony. If he is nice enough to be in the same room as me, I will take it.

Thor often rebels against his father in Marvel movies. What can you tell us about your rebellious side when you were growing up?
I wasn’t very rebellious at all. To be honest, I wish I had been a little more rebellious. It’s interesting figuring out who you are, and a lot of it has to do with your parents. You try to figure out how much you are like them and how much you are different from them; what you want to take and what you want to leave behind.

Why do wish you had been more rebellious? What do you feel you missed out on by not rebelling?
I feel like a lot of not rebelling was the desire to please, the desire to be good, and the desire to fit in. During those years, when you are at your most creative and imaginative, someone with a strong sense of self often rebels. The kids who were bad and rebellious were the real artists in our school.

What do you enjoy the most about working as an actor?
The greatest thing about my work as an actor is to be exposed to incredible charity organizations that do really, really meaningful work. I have recently worked with Free The Children, which is a group that provides education in developing countries. They are different because they cushion it with water, sanitation, health care and alternative income for the mothers so that the kids really do go to the school. Once the school is built, the kids actually continue to attend.

What other charity work are you involved with?
The other group I have worked with for a while is Finca, which provides micro loans. These are small loans primarily to women in developing countries so they can start their own businesses, which is a wonderful idea. It’s been a complete privilege to get to meet many of these people, and to be inspired by their generosity and kindness. I couldn’t be happier to be involved with projects like these.

How much do you think Marvel movies empower women?
There are definitely many strong women in these movies, and I think that’s a testament to the people who run Marvel. They have a respect for women with the way they want to characterize them. I think it will be exciting to see a [Marvel] movie with a central female character, which I think is coming. At least, I have heard it’s coming. And, of course, a central nonwhite character would be exciting to see, too.

There were a lot of strong female characters in superhero franchises in the 1950s and 1960s…
That’s true, and some of them were really remarkable for their time.

What are your thoughts on the notion that superheroes and comic books are a male-centric interest?
I think many women are into it, too. You just have to go to conventions to see how many women love this world. It’s fun to play a woman who is a scientist in these movies. I think the more variation of what women do in the public eyes is good for young girls to see.

How much are you aware of the Marvel cinematic universe? Do you watch the Iron Man films and Marvel’s The Avengers?
I watch all the films. I don’t watch them ten times; I go once at the theater. But I love them. I think they are really, really fun.

What are your thoughts on the new Star Wars movies?
I am so excited about them. I think J.J. Abrams is such a talent and I can’t wait to see what he does. I am only sorry that my character died, which means I can’t be in them. I saw him somewhere and I said, “How did this happen? I can’t believe I’m not going to be in the new movie.”

Do you have any desires to work in the theater?
I would love to work in theater. However, it would have to be the right place and the right time. I love the theater and I love going to see plays, but I don’t know what’s next for me right now. I guess we’ll have to wait and see what’s around the corner.
Posted by D.M. Anderson at 1:20 PM