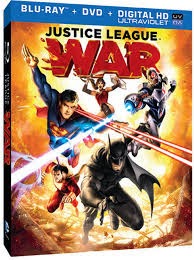 This latest DC movie is based on the comic, Justice League: Origins, part of an ongoing New 52 series, which chucks aside previous issues and relaunches the DC universe with new origins, costumes and backstories. If it sounds like I know what I’m talking about, think again.

I had to Google all that because I’m not a comic guy, I’m a movie guy. I couldn’t tell you squat about any of these characters other than what I’ve seen on TV and in movies. In my world, Wonder Woman is Linda Carter threatening to burst from her brassiere, Shazam is a crappy 1970’s kids’ show, Cyborg trades wisecracks with Beast Boy on Teen Titans and Green Lantern reminds me how much I hate Ryan Reynolds.

So for all I know, the whole DC relaunch pissed-off die hard fans worldwide. But maybe this latest direct-to-video DC epic is intended more for folks like me, who’s never purchased a comic book in his life, because I like this movie quite a bit. Aside from the limited-animation style similar to various DC series on Cartoon Network (a style I never cared for), Justice League: War is a fast moving, funny and interesting take on how these iconic heroes assemble for the first time in order to save the world from malevolent aliens.

The story is pretty perfunctory - I’ve yet-to-see a Justice League cartoon where the fate of the world wasn’t at stake - but what makes this movie work so well are how the characters interact. First of all, this is a DC universe where superheroes aren’t exactly embraced by the public (upset at the collateral damage their actions cause). Not only that, they don’t like each other too much either, and their snarky banter is pretty damned funny (especially between Green Lantern and Batman). Their overall competition with each other almost recalls the long-running gag in The Tick, which  features a city rife with too many superheroes.

Comic purists may disagree, but the movie also does a great job introducing Cyborg (the only character whose true origins are depicted). As a college athlete whose gridiron heroics are belittled by his estranged scientist father, the irony of how he becomes Cyborg provides a bit of unexpected drama. On the flipside of the coin, you haven’t lived until you witness Wonder Woman’s reaction when an angry citizen says she dresses like a whore.

Warner Brothers has long-threatened to make a big-budget, live-action Justice League film to answer Marvel’s success with The Avengers. Funny thing is, if they’d have used this story and script, they probably would have had that answer. This animated film may not be as ambitious, but it is a hell of a lot of fun, and probably the closest we’re gonna get to a full-blown Justice League movie in the foreseeable future.