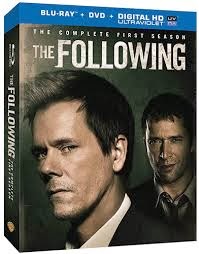 24 was one of the greatest network television shows of all time. Its premise was unique (one story per season, told in real time over two-dozen episodes). The quality of acting, writing and direction were top-notch, proving, to me anyway, that serialized television was capable of being as exciting as a blockbuster action film. 24 was Die Hard for TV and, no matter how ridiculous it got sometimes, was always compelling enough to keep me tuned in every week and suffering through all the commercials.

Those irritating commercial breaks are a big deal, and have often kept me from keeping up with subsequent other shows trying to be the next 24. Few of them are worth the agony of enduring 20 minutes of ads during each one hour episode, but some (like Revolution) are compelling enough to warrant marathon viewings once they are released on video or on demand.

Then there are those shows which had no business stretching their concept beyond a finite number of episodes. Prison Break immediately comes-to-mind; the first season was incredibly compelling, but subsequent seasons ran the premise into the ground. CBS’ Under the Dome commited an even bigger crime by turning a great Stephen King page turner into a padded-out soap opera, pointlessly stretched out to two seasons (as of this writing).

Then there’s Fox’s The Following, created by Kevin Williamson (a guy with a lot of clout, having written and/or created Dawson’s Creek, The Vampire Diaries and the Scream franchise), who was obviously inspired by 24 for this rare excursion into entertainment featuring grown-ups. If 24 is indeed TV’s Die Hard, then The Following would be TV’s answer to Seven (and all the brutality that suggests). Like 24, this 15 episode season tells a single story. Kevin Bacon plays Ryan Hardy, an alcoholic ex-FBI agent who never fully recovered from the near-fatal apprehension of charismatic serial killer Joe Carroll (James Purefoy). When Carroll escapes, Hardy is reluctantly brought back into the case which nearly killed him.

But things aren’t quite that simple. During the initial investigation, Hardy fell in love with Carroll’s estranged wife, Claire. In the meantime, Carroll himself (failed novelist, Poe aficionado and former college professor) is a brilliant manipulator who has amassed a seemingly endless cult of psychotic admirers (from all walks of life) willing to do anything to appease him. After Carroll is recaptured, these cultists continue to kill in his name and do his bidding. Carroll himself has an agenda which not only involves revenge on Hardy, but reconciling his fractured family and playing out his novel-in-progress in real life.

One would likely assume such a batch of crazy cultists couldn’t repeatedly thwart the FBI as often as they do in The Following, but this ain’t a documentary, and I was mostly able to overlook lapses in logic and go along with it. For the most part, this is a dark, compelling 15 chapter story featuring plot twists both shocking and dubious, and pulls few punches when it comes to lurid details and violence. Adding to the tension is the fact that, like 24, with the exception of Hardy & Carroll, we are never certain who’s gonna live or die from one episode to the next (and trust me, there’s death o’ plenty). All this is brought to a ominous conclusion which leaves the story open to continue, but still provides a satisfying capper if one were content to stop here.

Like many other serial series, The Following plays better on disc than regular network TV. And even though it has been renewed for a second season, I can’t imagine its creators being able milk much more from the premise than they already have. As it stands, the first season works well enough all by itself. I think Williamson and Fox should quit while they’re ahead.

EXTRAS:
BLU-RAY, DVD & ULTRAVIOLET VERSIONS
FROM A DARK PLACE: MAXIMUM EPISODE MODE: Audio Commentary
THE THRILL OF HORROR: THE CREATOR BEHIND THE FOLLOWING: A feature on series creator Kevin Williamson
THE CULT OF JOE CARROLL: INSIDE THE FOLLOWERS: Cast members and producers discuss some of the characters
Featurettes: THE FOLLOWING PRODUCTION CHRONICLES; THE FOLLOERS DEN; THE POE MASK; THE FOLLOWING - FREE MEGAN
Season Finale Commentary
Deleted Scenes