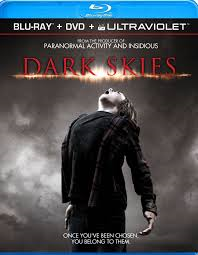 There's something about weird-ass symbols that make everything just a bit creepier.

Case in point...last week I got a postcard in the mail. There was no return address...just a single message: "Have you been chosen?" Normally, I would have first assumed I won something, followed almost immediately by the realization that whatever I was 'chosen' for would likely require sitting through a time-share seminar. But this cryptic announcement was surrounded by bizarre shapes and symbols...almost like mini crop circles. For a brief second, the chronic paranoia in me took over. I've seen enough horror movies to know weird-ass symbols are never a good sign

The postcard wasn't directly addressed to me, but Free Kittens Movie Guide, meaning it was a promo. Sure enough, Dark Skies on Blu-Ray arrived a few days later, a film where these shapes play an important role in the story. I gotta admit it was an ingenious introduction to the movie.

This one is touted as being "from the producer of Paranormal Activity and Insidious," two films which were far better than I thought they'd be. Hence, I had slightly higher expectations for this one than a lot of recent horror movies.

Dark Skies follows the Insidious formula pretty closely...a typical, young suburban family begins to experience inexplicable events at home (groceries tossed around the kitchen, family photos vanishing, suicidal birds, etc.). Most of the strange phenomena appear to be directed at Jesse & Sam, their two kids. The dark bruises appear all over Sam’s torso. Moody older brother, Jesse, has a violent seizure, and upon examination, their physician finds strange symbols tattooed all over his body (See? Not a good sign!). Mom believes supernatural forces are behind it all. Dad needs a lot more convincing, which he gets after installing video cameras all over the house and catching the terror on tape. But it isn’t until they meet an eccentric, cat-hoarding recluse (J.K. Simmons) that they learn what they’re up against: The Greys, a horde of kid-snatching extra-terrestrials.

So yeah, Dark Skies is basically Insidious with aliens. Writer/Director Scott Stewart (who also helmed the underrated Priest) provides some nice moments of tension throughout the first half. A solid cast helps make the whole thing seem at-least plausible. Although the concept is a little murky, it’s mostly intriguing enough to maintain interest. However, unlike Insidious (which had some truly terrifying moments), Dark Skies is never very scary, and the payoff isn’t nearly as satisfying. It also feels padded out with some unnecessary subplots. This family’s financial problems don’t figure into the story at all, nor does Jesse’s awkward sexual awakening (these scenes slow the movie down to a crawl).

Though a fairly predictable variation on the family-in-peril genre, Dark Skies is well-made for what it is. It doesn’t instill the same level of dread as Insidious, but it’s far from the worst of its ilk (and a hell of a lot better than any of the Paranormal Activity’s dreadful sequels). I don’t regret being chosen.