STAR TREK INTO DARKNESS and the Heat of the Moment 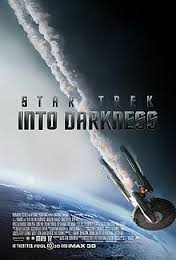 I have a question for all of you frequent moviegoers, which I'll get to in a moment.

Trekkies all, the family and I went to see Star Trek Into Darkness, the second film in the rebooted franchise. I won't go into detail about the movie itself, other than it is all kinds of awesome, with enough Easter eggs and nods to the original series (as well as one of the early films) to please even the most casual fan. To mention too much about the film would mean giving away some of its greatest surprises. However, something began to trouble me during the third act, a gnawing feeling that had nothing to do with the movie itself.

Sitting in that packed theater, a daughter on each side of me, I began getting uncomfortably warm. At first I thought it was just me, a hot flash or something (I get more of those as I get older and my body rejects the shit I put into it). None of this diminished my enjoyment of the movie (I think this is the best Star Trek film of all, including the sacred Wrath of Khan), but as the end credits began to roll, I couldn't wait to get out of there. We usually stick around for any post-credit surprises (many geek-friendly flicks have 'em these days, thanks to Marvel), but my oldest daughter, Natalie ,heard there were none, so I led the charge out of the theater, sighing with relief once the cool lobby air hit my face.

My wife, Francie, stopped to hit the restroom on the way out. I knew she loved the movie without even asking. I always know what she thinks of a film based on how often she pees while it’s playing. Two or more times means it sucks, one trip means it's good, and zero bathroom breaks means it's great. The only time she left during Star Trek Into Darkness was because Lucy (our youngest) had to go potty, so judging by how long Francie was in the restroom after the movie, this was one of the great ones. If anyone reading this is still debating whether or not to see the film, my wife's willingness to hold it until the end is as good a recommendation as a thumbs-up from Roger Ebert. 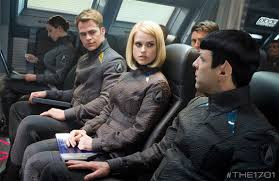 "You know, it's customary to say 'excuse me' afterwards."

Anyway, on our way to the car I complained about the sudden heat in the theater. Francie argued maybe it was body heat from everyone else. That's horseshit, because I just sat in air-conditioned comfort for two hours among a few hundred people, only to get suddenly overheated at the end. It wasn't collective body heat or a bad diet that caused my discomfort, nor is it the first time this has happened. I've noticed this sudden environmental change during the last several movies we attended, always during the final act, regardless of the number of people in the theater. It was especially bad during Iron Man 3, because we had to stick around through the end-credits (if you saw that one, you know why).

So my question to you is this: Is it me, or are some theaters shutting off the air-conditioner during the final act so you'll get the hell out of there? Call me a conspiracy theorist, but I'm convinced they're trying to clear everyone out of the auditorium as fast as possible so they can get a head-start cleaning up before the next show. Next time you go to the movies, look that the number of theater employees standing off to the side, brooms and trash bags in-hand, before it's even over. It's nearly as distracting as someone texting a few rows in front of you. They can't wait for you to leave because the faster you're outta there, the faster they can clean up your mess and move on to the next auditorium. What better way to clear the house than making it too uncomfortable to stick around?

I read somewhere once that McDonald's intentionally makes their restaurants' seats too uncomfortable to sit in for long periods of time, so you'll wolf down your meal and leave immediately after, thus assuring a steady flow of customers in and out of the place. I can't verify whether or not that's true, but you gotta admit that it makes sense from a business standpoint. So isn't it reasonable that multiplex theaters would similarly-benefit from a faster turnaround time? I would think labor costs would be drastically-reduced if employees could commence cleaning before the credits are over, and the only way to do that is get all of us out of there.

I'll bet theater employees absolutely hate it when Marvel Comics movies are playing. Of late, Marvel Studios have turned post-credit scenes into an art form, offering humorous codas or tantalizing peeks of what's in-store for the future. A lot of moviegoers have caught on, willing to face the heat and stick around through the credits of these films, forcing employees to idly standby until the screen goes dark.

I'd like to think I'm not the only guy who thinks theaters are intentionally adjusting the climate for a faster customer turnover. Because if I am, that means it's all me...either it's in my head or I'm simply older, fatter and less-able to sit for that long without pitting-out.
Posted by D.M. Anderson at 9:06 PM