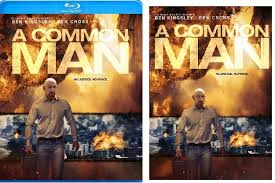 Ben Kingsley's current career is a lot like Michael Caine's in the 70s & 80s. Caine was so well-respected that he could get away with appearing in some godawful stuff (The Swarm, Jaws: The Revenge, etc) and nobody thought any less of him. Similarly, Kingsley is so good that when he shows up in crap like The Love Guru or The Dictator, we may question some of his choices, but we respect the fact he probably just loves to act. Besides, neither of these guys are to blame for any of the smudges on their resumes.

Make no mistake, A Common Man is definitely one of Kingsley's smudges. Here, he plays an unnamed man who's planted five bombs somewhere in the city of Colombo, Sri Lanka. He informs the police (led by a surprisingly awful Ben Cross) that unless several high profile terrorists are released from prison, he will detonate the bombs. Sounds like an interesting set-up for a nice little cat & mouse thriller, even though its obvious low budget prevents it from being the action-driven Die Hard clone it probably should have been.

﻿
And indeed, the film starts off great as we watch this man travel by bus and train to plant his bombs throughout the city. Considering we know almost nothing about him, Kingsley gives the character a nice balance of sympathy and ice-cold determination. Then again, Kingsley has always been a great villain. Too bad his smooth performance is wasted on a movie like this.

A Common Man completely falls apart the second any other characters show up and begin to speak. The dialogue is awful, which isn’t helped by some atrocious dubbing. Ben Cross has always been a reliable character actor, but here, it looks like he’s phoning it in (ironic when you consider most of Kingley’s role requires him to literally phone it in). The film is also clumsily-paced and frequently boring. For an “action movie,” A Common Man has precious little action.

Action films do not always need to be big-budget knock-outs, since truly creative filmmakers are often able to make the most of their assets. The only asset A Common Man has is Kingsley. He’s the only reason anyone would want to see this, and that may not be enough.