BUCK ROGERS IN THE 25TH CENTURY and the Southgate Theater (RIP) 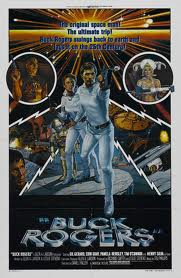 God bless the Southgate Quad and its non-existent security policy. It allowed me to enjoy a plethora of movies long before I grew up to notice how shitty a lot of them were.

Once located in the Portland suburb of Milwaukie and only a few miles from where I lived, the Southgate was a big yellow box in the middle of an industrial area, with one giant auditorium for the blockbusters and three tiny cracker-boxes for everything else. The lobby itself was huge, loaded with pinball machines & the latest techno-triumph which had us kids hypnotized...Pong. And for some reason, there was a massive mural of the moon looming overhead. It was a pretty modern building for its time and the only multiplex in all of Southeast Portland.

I remember when my parents took us to the Southgate to see The Three Musketeers and hearing Dad bitch that it cost almost ten bucks (for the whole family) to get in. Mom added that when they were kids, tickets were only a quarter, and that single shiny coin got you two movies and a cartoon (often a Looney Tunes short). It must have been awesome to be a film fanatic back in the 40s and 50s.

Not that 70's ticket prices were terrible to me. We didn't get a cartoon, but still got a lot of double features, and if you were 11 or younger, tickets were only a buck and a half. Don't ask me why 12 was the magic age to pay adult prices (especially since it didn't permit us to see anything we couldn't watch at 11), but I was lucky enough to get away with paying kiddie prices until I was almost ready to drive. Because of that, I wasn't too picky whenever I went to the Southgate Quad to engage in the act of theater-hopping (which was about every week).

So actually, I had it better than my folks when they were kids because there weren't any multiplexes  in the 50s. A well-planned bit of sneakiness allowed me to catch all four movies playing at the Southgate on any given weekend. Four movies divided by a buck and a half? That's only 37 cents (assuming, of course, that all four movies were worth seeing to a teenager, which wasn't really that often). But even after I could no longer pass for 11 and had to pay the exorbitant price of three bucks, hanging out at the Southgate was a pretty great deal and I probably saw more movies there than any other theater in my life.

The downside to theater-hopping at the Southgate was there wasn't always a lot of turnover (Jaws played there for nine months), so sometimes me and my friends ended up seeing the same things over and over, even if they weren't that great to begin with, like Buck Rogers in the 25th Century.

While not necessarily a bad movie, Buck Rogers in the 25th Century was a rip-off, for two reasons...

First, this was Universal Pictures doing the whole Roger Corman thing by cheaply capitalizing on a hot property, Star Wars (which was ironically inspired by old movie serials like Buck Rogers). In order to avoid spending much money, many of the battle scenes used footage from the expensive TV flop, Battlestar Galactica (which, in turn, was ironically inspired by Star Wars). Buck Rogers in the 25th Century followed the Star Wars formula pretty close and was a fairly entertaining way for undemanding kids to kill 90 minutes.

Second, it looks and plays like a 70's TV movie, which I later found out it actually was. Buck Rogers was intended as a television series all along, and the movie me & my friends shelled out our precious allowance to see was the pilot episode, but Universal released it in theaters first. It aired on NBC only a couple of months later as the first episode. Throwing the pilot episode of a TV show onto the big screen is kind-of an ingenious way to hype a series when you think about it: Buck Rogers later showed up on TV with theatrical cred and the entire original cast onboard (because they originally signed up to do a television show).

I didn't know any of this as I sat through the movie at least four times. But if I had known the movie was going to show-up on TV in a couple of months, would it have made a difference? 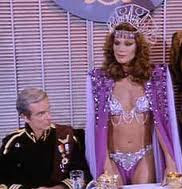 Tim O'Connor is thankful for the napkin in his lap.

Probably not, because even back then, three bucks wasn't a lot of money, so when a movie was just a cheesy rip-off, we seldom felt ripped-off. And to be honest, despite its TV production values, Buck Rogers in the 25th Century was stupid-but-undemanding fun at the time (and Erin Gray looked like my friend's hot mom I'm ashamed to admit I fantasized about). Simply put, there wasn't a lot of risk.

That isn't true anymore. Whenever my wife and I go out and the movie ends up sucking, we're out forty bucks (this includes popcorn and two drinks). You might be tempted to come back with, "Well, that's just inflation."

No, it isn't. You know how much it cost to buy a movie on VHS 25 years ago? Twenty bucks, which is still what you'll spend on the average Blu-Ray disc today. Even though technology has improved by leaps and bounds, the price of home video has gone up 0% during the past two decades. It used to be that renting a movie was a cheap alternative to admission prices. Now it's even cheaper to buy the movie altogether.

I recently bought the 2011 prequel to The Thing on Blu-Ray, sight unseen. It was nothing special, but I enjoyed it enough to justify the $14.99 I shelled out at Best Buy. However, I would have felt ripped-off if we had spent forty bucks for my wife and I to watch it in a theater. My assessment of The Thing was directly influenced by how much I paid for it. If I had paid today's ticket prices for something like Buck Rogers in the 25th Century, I'd be screaming for Gil Gerard's head unless I was able to sneak into another auditorium to catch something better. But I don't do much theater-hopping anymore. Part of it is guilt, but it's mostly because all of today's megaplexes make it a lot harder because they juggle the showtimes.

With hindsight, I doubt the management of the old Southgate really cared we were theater hopping back then as long as they kept selling popcorn & soda (theaters' biggest source of income...they get relatively a relatively little percentage of a movie's box office take). Hell, maybe they even encouraged it, since the longer we were there, the more concessions we'd buy.

I think the last movie I saw at my old stomping grounds was Star Trek: Insurrection. I chose the Southgate because of my fond memories, and it had been years since I'd visited the old place. But when I went into the lobby to complain about the terrible sound quality, it turned out there was nothing actually wrong with the audio...the owners of the old Southgate simply never upgraded the sound system of their auditoriums since I was a kid. It was depressing...the theater that first showed Jaws in the Portland area was now a relic. Archaic little quads like Southgate became dumping grounds for movies after they ended their runs at the modern megaplexes.

The Southgate closed its doors over a decade ago. It stood empty for awhile before being unceremoniously bulldozed. The land remained empty for a long time, and I really hoped maybe someone would replace that old, puke-colored box with a new Southgate. That never happened. Today, it's just a parking lot for those who work in the surrounding warehouses. Whenever I drive by that location, a part of me mourns just a little bit. The Southgate was never more than a big ugly box, but it was a major part of my childhood.
Posted by D.M. Anderson at 6:41 PM