PINK FLOYD: THE WALL and My Depressed Pooch 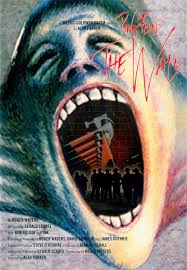 I have a Wheaten Terrier named Murphy. He's sort-of a 'rebound' dog, meaning we bought him to replace another Wheaten Terrier, Moose, who was only ten months old when he was hit by a car.

I was devastated when Moose died, which is ironic because I didn't initially even want a dog. Until my wife brought him home without bothering to check with me (resulting in a few days of giving each other the Silent Treatment), I was content with cats. But Moose endeared himself to me and I quickly grew to love him. When he died, the house felt suddenly empty. A few days after his passing, I did what many guys do after being unceremoniously dumped by a girl they assumed was the love of their life: quickly find a dog who looks just like him.

I found a breeder in Arkansas who had Wheaten puppies at a cheap price, and after pleading to my wife with teary eyes, we bought Murphy. It was actually more expensive to pay the shipping price than for the dog himself. We later discovered why we got him so cheap...he came from a puppy mill.

Generally, Wheaten Terriers are friendly, energetic, playful, loyal and loving. So was Moose, but while Murphy did indeed resemble Moose, like that rebound girlfriend, the similarities ended there. Murphy turned out to be easily frightened, often spending a lot of time cowering under our bed, with a huge distrust of male humans. During those first few months, his overall anxiety messed with his digestion, and he ruined our carpet with puddles of vomit and diarrhea. Whenever we called him, even with a treat in-hand, he'd run away. It took a loooong time for him to warm up to any of us. Even though I was the one he first laid eyes on when I picked him up at the airport, it was with Francie (my wife) that he developed the strongest bond (which pissed me off to an extent, since I was the one who wanted him so badly).

Murphy eventually overcame most of his quirks, but he'll still go scampering into the bedroom if you stare at him too long, and with the exception of me, he barks like he's rabid whenever a male enters the house. He doesn't like to play with other dogs or visit my kids in their rooms. He shits on the driveway instead of the yard. And while he is sometimes very playful, there are often times when he just lays on the floor, looking like he hates being a dog. It's even worse when Francie leaves. When she's gone, he just mopes around, totally depressed. He doesn't want to play, eat his favorite treats or go on walkies. And he'll stay that way until he sees Francie again. Watching him like this sometimes ends up depressing me.

If there was a soundtrack to Murphy's life, it would consist of Pink Floyd music. In fact I'm convinced that, if he were human, his iPod playlist would contain of a ton of Floyd, which would enhance those times he chooses to wallow in his own misery.

Pink Floyd is, of course, one of the biggest bands of all time. They were especially huge in the 70s and early 80s, making records which practically begged you to drop a hit of acid before throwing on the headphones. Their album, Dark Side of the Moon was to head trips what John Williams' film score was to Jaws. 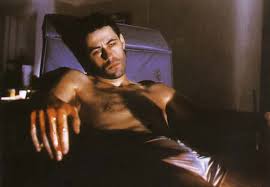 Bob Geldof wants to change the channel, but like so many of us, can't find the remote.


I was in high school when Pink Floyd released their biggest album, The Wall. The band was already very popular, but this double-album turned them into a cultural phenomenon. Everyone was listening to it, mostly because of the hit single, "Another Brick in the Wall," a song that, when heard outside of the context of the album, sounds like a simple-minded rebellious anthem. But Pink Floyd was never a 'singles band'. Their 70s records were conceptual, all songs tied to an ambiguous central theme or idea. They were also dark, nihilistic and generally contemptuous of human nature. With hindsight, it is obvious the members of Pink Floyd (songwriter Roger Waters in particular) were not doing the same drugs as their longtime fans, and The Wall is easily their most bitter, angry & mean-spirited record, even giving a few 'fuck yous' to the legions who made Floyd so huge to begin with.

I briefly got into Pink Floyd back then, mainly because of a stoner buddy named Scott. And yeah, during those times we passed the bong around, they were the greatest band on Earth. But the inherent problem with Floyd's music is this: listening to it sober is an entirely different experience..

I can't speak for everyone, but for me, without mind-altering chemicals, Pink Floyd is somber, slow and very depressing. And not just the lyrics...the music itself is depressing. Even if the lyrics to "Dogs," (from the album, Animals) were actually about dogs, the music alone would make you wanna curl up in bed until the bad feelings go away.

The film, Pink Floyd: The Wall, came out in 1982 (my senior year). Of course, me and my cannabis cronies went to see it (at a midnight showing). Of course, we got good & baked beforehand. So of course, we thought it was great (especially the mind-blowing animated sequences). This wasn't the first musical based on a popular rock record. There was 1975's Tommy, an incoherent mess with terrible performances. Then we got Sgt. Pepper's Lonely Hearts Club Band, such an awesome train-wreck that watching it today can still cause altered minds to explode.

If nothing else, Pink Floyd: The Wall is one rock musical which stays true to its origins, telling its story exclusively through music and imagery (since there’s no actual dialogue, one could even consider it the longest music video ever made). Though star Bob Geldof croaks out a few tunes, the rest of the music is lifted directly from Floyd’s album. Band leader Roger Waters also wrote the screenplay, so it’s obvious what shows up on screen was his vision all along. Hence, the movie is as bleak and cynical as the original record, making it arguably the darkest musical of all time.

Its faithfulness to the source material and outstanding direction by Alan Parker are truly admirable. But admiration of a movie isn’t necessarily the same as actually enjoying it, especially once the drugs wear off. Pink Floyd: The Wall is just as depressing as any album the band ever made. The fact that it has aged better than similar cult films from the same era actually works against it. As badly-dated as movies like Heavy Metal or The Rocky Horror Picture Show are, their antiquity renders them cheekily amusing. But even today, watching Pink Floyd: The Wall is like watching my dog Murphy mope around the house in one of his states of depression.

I guess the main difference between the movie and my dog is I don't like the film's main character, Pink. We're given no reason to think he's anything but a spoiled rock star trying to convince us how terrible it is to be a rock star, just like we've never been given a reason why it sucks to be a member of Pink Floyd. They were the biggest band in the free-fucking-world at the time, yet still enjoyed belittling the masses who made them so huge to begin with.

But I do care whether or not my dog is happy. Despite his quirks, I know he loves us. He's simply maladjusted because of his abusive upbringing. Because Pink Floyd's music is the perfect soundtrack for wallowing in depression, the haunting melodies of their music drift into my head whenever I see Murphy staring longingly out the window when Francie's gone.
Posted by D.M. Anderson at 1:03 PM

I can sooo relate to your dog story. We were cat people who haven't owned an animal for about seven years. We decided to adopt a rescue dog and wanted a small one. We chose a five year old seven pound chihuahua and figured she'd bark and play like most dogs. Wrong! We couldn't get her out of her cage and we've never heard her bark. She is simply a "couch potato." However, she is our little "tator" and we love her dearly. The only time she becomes active is when we eat. Then she dances on her hind legs trying to impress us with her moves so we'll give her a treat.

Great write up Dave. I'm glad Murphy has adjusted as much as he can. I felt the same after losing Sadie; that's why we got Ellie. Dogs looked the same but totally different personalities. Ellie bonded to Char instead of me. I can so relate to your angst. Now Minnie is my Sadie replacement and that empty feeling is gone.
Pretty right on with your analysis of Roger Waters Pink Floyd. I liked them again after he left the group and with the exception of Comfortably Numb, most of the Wall doesn't get play in my house.
Keep up the great reviews. Missed you this summer but I'll try to see you during the holidays.
David Berkham