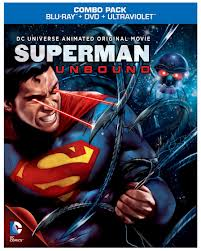 I like Superman, though I wouldn't consider myself a die hard fan. I really liked the first two live-action films from the late 70s, and even thought Superman Returns was okay. But I never read the comics or watched the various TV cartoons that have popped up over the years. He was never as interesting as Batman.

I have a basic working knowledge of Superman lore: he's an alien, has a girlfriend named Lois, can be killed by Kryptonite and is able to disguise his true identity by throwing on a pair of glasses. As far as his various recurring nemeses goes...well, I know who Lex Luthor is. That's why I was thankful to have my wife, Francie, at my side to watch Superman Unbound in order to fill-in the blanks and explain when the movie stays-true-to, or deviates-from, established history. Francie's always been the superhero expert of the family, but even if she wasn't around, I thoroughly enjoyed the movie enough on its own terms.

In Superman Unbound, Clark and Lois have been dating for a long time, and she’s frustrated by how his double-life interferes with their relationship. Complicating his life is his recently-arrived cousin, Supergirl, who is a bit more reckless. As the story progresses, she’s often the one who’s there to save the day in Metropolis while he's out in space getting his ass kicked by Brainiac, a nefarious half-man, half-machine who seems to be even more powerful than the Man of Steel. Brainiac has been traveling the universe in his skull-shaped ship, shrinking giant cities from various worlds to put in his collection (including Supergirl’s hometown, lifted out of Krypton before the planet destroyed itself). Brainiac doesn’t make it completely clear how shrinking major cities to keep in jars is any kind of advantage, since it doesn’t seem to make him any more powerful...but never mind. It’s a cool enough story. 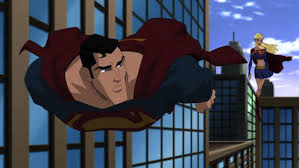 "Smell that? That's what you get for following me."


The movie is done in the same limited-animation, comic-noir style of the popular DC Comics shows on Cartoon Network, which I suppose will please fans. I never cared for this style (to me, traditional animation peaked with Looney Tunes), but was able to overlook it because the story is interesting, the characters are well-rounded and, best of all, the dialogue is smart and sometimes quite funny.

It’s the humor in Superman Unbound that I appreciated the most, especially in two great scenes. The first features Steve Lombard (a hunky co-worker at the Daily Planet and a total douchebag) who explains to Lois why he thinks Clark Kent might be gay. The other is Lois’ deadpan response (and double-fisted gesture) to one of Brainiac’s ominous, foreboding warnings. The scene is unexpected and laugh-out-loud hilarious.

While on the subject of adult humor, Superman Unbound earns its PG-13 rating. In addition to some amusing sexual innuendo, the movie is pretty violent at times. Since I’ve never watched any of the current DC Comic-based programs on Cartoon Network, I don’t know if this is typical of the franchise, but this particular film was obviously not made with little children in-mind.

That being said, I enjoyed the movie more than I expected to, and I think most die hard Superman fans will as well. It is funny, fast-paced and pretty well made for a direct-to-video production. I also have to say the overall picture quality of the Blu-Ray is great.
SPECIAL FEATURES: Brainiac: Technology and Terror, preview of Justice League: The Flashpoint Paradox, 4 DC Comics cartoons, digital excerpt from the graphic novel, Superman: Brainiac. EXCLUSIVE BLU-RAY FEATURES: Kandor: The History of the Bottle City, audio commentary