THE MARINE 6 Takes Care of Mizness 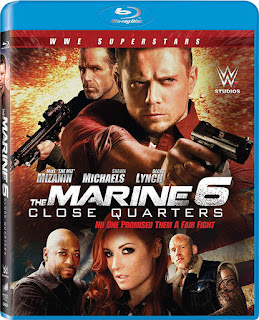 AVAILABLE ON BLU-RAY FROM
SONY

I'll say this much: The Marine 6: Close Quarters is better than The Marine 5. I might even go as far as to say it's the best film in the franchise since The Miz took over the title role. That's still faint praise, since all those sequels have been low-wattage knock-offs of better action pictures. But prepared as I was to give it a critical beating, I gotta admit I kind of enjoyed this one.

I dunno...maybe my expectations were already low. After all, the plot of The Marine 6 is very similar to the last film. This time, everyone's favorite pummeling paramedic, Jake Carter (The Miz), teams up with old Marine buddy Luke Trapper (Shawn Michaels) to take on Maddy Hayes (Becky Lynch), who's kidnapped a juror's daughter. Naturally, Jake & Luke are up for the challenge, trading wisecracks along the way. And naturally, Maddy and her endless supply of cannon fodder henchmen are supremely cocky throughout the film, despite repeatedly getting their asses handed to them.

But The Marine 6 has a few things going for it that previous sequels didn't. There's the welcome addition of Shawn Michaels to the cast. With all due respect to his WWE accomplishments, The Miz has the on-screen personality of a vanilla cone. Michaels' grizzled charm gives this film a charismatic boost the series has been sorely lacking since John Cena had the good sense to quit. And along with the usual quota of budget-conscious battle royals is a narrative curve-ball I wouldn't dream of giving away here, but will likely surprise the hell out of fans of this franchise.

Elsewhere, it's business as usual...a recycled plot filled with bloody beat-downs and gory gunplay, all handled with workmanlike skill. Aside from the aforementioned story surprise, The Marine 6 may not be all that memorable, but it moves along briskly with a minimum of fuss. And if there is a Marine 7 on the horizon (like there's any doubt), they may have passed the torch to the right guy.