THE FOREST OF LOST SOULS: Misery May Not Always Love Company 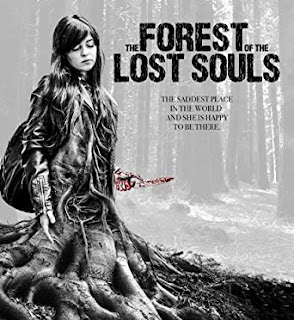 The fictional forest of the title is a place where people frequently go to commit suicide, which we learn during the very first scene when a young girl swallows poison, then wades into a lake and silently dies.

Later, grieving family man Ricardo (Jorge Mota) visits the woods to do the same thing, only with a knife. He meets Carolina (Daniela Love), another young girl who he says reminds him of his own daughter. She's apparently there to kill herself, too, and during their conversation, while coming across various other dead bodies, they make fleeting attempts to talk each other out of suicide. Ricardo's mind is made up, though, but uses Carolina's poison - with her permission - to avoid any pain.

At this point, The Forest of Lost Souls gives us two revelations. First, the girl who killed herself in the opening scene was one of Ricardo's daughters. Second, Carolina takes his knife and viciously stabs him anyway, assuring an agonizing death. Afterwards, she takes his phone and car, using both to find what's left of his family with the intent of killing them, too.

Deliberately paced and visually intriguing, the film's use of black & white effectively reflects the film's tone, not-to-mention the overall despair most of these characters feel. The Forest of Lost Souls is beautiful to look at and the interaction between Ricardo & Carolina is quite engaging - even funny at times - holding the promise of exploring the nature of sadness and what leads one to choose suicide as a way out.

However, the interest level wanes once the story leaves the forest to focus on being the horror film it's promoted as. Ricardo's dysfunctional family isn't as interesting - or likable - as Ricardo himself and we spend a lot more time around them than we'd like to. Caroline is a chillingly cruel character whose cold-blooded apathy is unnerving, but writer-director Jose Pedro Lopes doesn't give her much to do during the second half besides stalk her prey. He maintains the same dark tone, but in the long run, that might actually work against it. The film's unrelenting nihilism defuses any attempts to create tension because we're pretty sure how things will turn out long before the end credits roll.

Still, The Forest of Lost Souls certainly earns points for presentation. It's visually arresting and atmospheric, particularly during the first half. Had the narrative been more consistently compelling - perhaps focusing entirely on Ricardo & Carolina - this could have been a slow-burning stunner. But as-is, the film is watchable.