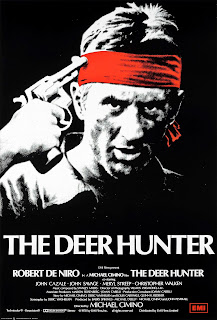 The first time I saw The Deer Hunter, my only takeaway was that the Academy of Motion Picture Arts and Sciences must have lost their collective minds. This was the worst excuse for an Oscar winning movie I'd ever seen. Excruciatingly long and oppressively ponderous, it was hardly worth the effort just to catch the notorious Russian Roulette scene. Of course, I was much younger back then, naively expecting another Apocalypse Now, which epitomized the modern war film for me (or anti-war film, since only an asshole would ever dream of glorifying Vietnam).
Recently revisiting The Deer Hunter for the first time in at least three decades, it's hard to believe I once hated it. Sure, it's no Apocalypse Now or Full Metal Jacket, which I still think are more entertaining (though my appreciation for both has diminished over the years). But The Deer Hunter isn't nearly as cynical, and now that I'm older and wiser, I also realize it isn't really a war movie at all.
It’s equally hard to believe the film once stirred so much controversy for its alleged racist underpinnings, mostly leveled by those who accused the movie of stereotyping the North Vietnamese. Of course, Vietnam was still a hot-button issue at the time, but when you look at The Deer Hunter now, even the biggest soundbite junkie who ever walked the Earth might need to concede it was never about Vietnam. The backdrop could have been any war, a mere clothesline on which to hang themes of loyalty, friendship and promises kept under extreme duress.

I'm also reminded it’s possible for a director to shoot his entire creative wad with a single movie. Director Michael Cimino never came close to making another good film after this. Sure, Heaven's Gate has enjoyed some critical reassessment over the years, but I still think it's a pretentious dumpster fire. This raises the question of whether the success of The Deer Hunter is due to his directorial skill or the cast & crew he managed to assemble around him (sort of making him a cinematic Ozzy Osbourne). That’s a much more compelling topic of continuing debate than the so-called political agenda that raged all those years ago.

We all know about the infamous Russian Roulette scene (still unnerving after all these years) and I’ll try not to dwell on it since that horse has been beaten to death. The fact that very little of the film actually takes place in ‘Nam is evidence enough that The Deer Hunter has more to say about the human condition and the nature of friendship than the war itself. We spend over an hour getting to know the main characters (Robert DeNiro, John Savage, Christopher Walken & John Cazale) living their deceptively mundane, blue-collar lives before any of them are put in harm’s way, not so their fates have more dramatic impact, but because the movie is about their relationships to each other. We quickly identify with the bond between Mike (DeNiro) & Nick (Walken) - the crux of the film - and the promise Mike makes not to leave Nick behind should things turn out for the worst in Vietnam.

Of course, things do turn out for the worst, but not in the way anyone (including the audience) expects. The movie is also deceptively (intentionally?) boring at times in its depiction of the everyday lives of these guys, laying the groundwork for a third act that is emotionally devastating. We see these guys' perception of the world ripped away, replaced by an unparalleled exposure to apathy and violence that soon becomes as routine as putting your shoes on in the morning, followed by the unreasonable expectation that you can simply return to your previous life when it’s all over. Yet loyalty & friendship overcomes that. These characters are flawed, occasionally unlikable & selfish. In the end, however, they display qualities we typically cherish most. Despite its somber tone and superficial cynicism, The Deer Hunter might be one of the more optimistic movies ever made about war's effect on the human psyche.

The story is presented unconventionally, a major reason I originally found it off-putting. This is the first time I noticed how much of the story is told without exposition or ‘thoughtful’ dialogue...most of the script consists of seemingly meaningless banter and small talk, or in the case of the Russian Roulette scene, adrenaline-fueled desperation. In fact, the theme of the entire film can effectively be summed up in two lines of drunken dialogue between Mike and Nick, when one makes a off-handed promise to another. The relatively serene hunting sequence speaks more about these guys than pages of words could.

The Deer Hunter is also a technical marvel, and this is where one may question the presumed ‘genius’ which briefly earned Cimino carte blanche in Hollywood. Yes, he deserved to be at-least nominated for Best Director Oscar that year, but could he have done it without the cinematography of Vilmos Zsigmond, whose camera is practically another character, or Peter Zinner’s editing? Then there’s the stellar cast, whose characters would have drowned in a sea of cliches in lesser hands. Cimino would never have this level of collective talent at his disposal in his later pictures. The Deer Hunter is the working definition of an ensemble film on both sides of the camera.

Most importantly - what a lot of detractors fail to notice - the movie is not a statement. It has no agenda, no politics and makes no claims of historical accuracy. The Vietcong are simply a plot device to effect change in the main characters (they are evil, but not because they are Vietnamese). In fact, The Deer Hunter may be the only major Hollywood film ever made about Vietnam that never questions whether or not America should have gotten involved. Ultimately, the movie doesn’t give a damn about the war.

The Deer Hunter is an epic character portrait - though still way too long - about how people emerge from traumatic events forever changed. With hindsight, it probably did deserve to win the Best Picture Oscar in 1978, one of the few times I’ve ever changed my mind over the Academy’s decision.
Posted by D.M. Anderson at 1:23 PM