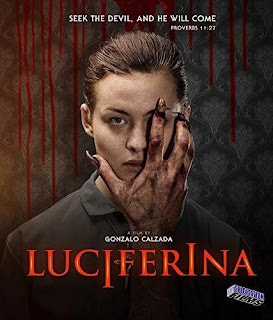 "Seek the devil, and he will come," reads the tagline of this Argentine horror film. After seeing Luciferina, those words could be considered a double entendre.

One thing is certain: the climax - no pun intended - gets points for audacity. Thank God Father Merrin never attempted to vanquish demons through sexual healing, because...yecch. Without giving too much away, the gonzo final act of Luciferina is definitely memorable, though not necessarily for the reasons writer-director Gonzalo Calzada intended.

Until then, the film struggles to find consistent narrative footing. Natalia (Sofia Del Tuffo) is a young nun who returns home after her mother dies. Dad is severely injured and bedridden, while semi-estranged sister Angela (Malena Sanchez) is about to venture into the jungle with abusive boyfriend Mauro (Francisco Sanchez) and some college buddies, where they plan on cleansing their souls with a local shaman. The rite involves drinking a hallucinogen taken from a mysterious plant, and Natalia reluctantly tags along.

Instead, one of the kids, Abel (Pedro Merlo) becomes possessed by Satan and violently kills everyone but Natalia, who's no ordinary nun. She is sort-of clairvoyant at times and can occasionally see a glowing aura around certain people. But aside from providing some surreal sequences, her gifts don't really figure into the plot, which is part of the problem. Luciferia is filled with some wonderfully dreamlike moments, but seem to exist for their own sake. The story is all over the place and often perplexing, at least until it's made clear how the evil must be defeated.

It's at this point that we're pretty sure the film exists solely for its sexually-charged climax, which is explicit, lengthy and, I have to say, often unintentionally funny. Still, it's lively and certainly something you don't see in a typical possession film. One only wishes the film had enough tricks up its sleeve to make the proceeding 90 minutes more than run-of-the-mill horror. As it is, our interest in the convoluted story ebbs and flows. There's a flashback birth scene that's pretty disturbing and a few fairly graphic deaths. On the other hand, there's a lot exposition that doesn't always make much sense and, aside from Natalia, we've seen most of these characters in countless other horror films. Exactly what is it about college students stuck in the middle of nowhere that filmmakers continue to find so fascinating?

While well made and certainly watchable, Luciferina is ultimately less than the sum of its parts. There are some effectively chilling moments and haunting imagery leading up to its bonkers climax, but from a narrative standpoint, the dots aren't connected as well as they should be.