Can Mike Tyson Save GIRLS VS. GANGSTERS? 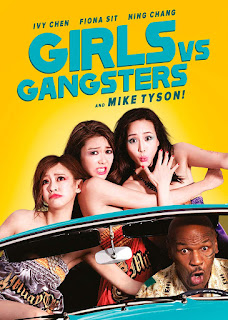 Is it a mere coincidence that Mike Tyson happens to appear prominently in two of the worst movies I've reviewed this year? Probably. It isn't as though he's the reason they happen to be awful. Not even Daniel Day Lewis could save either China Salesman or this execrable comedy, Girls vs. Gangsters.

Of course, Tyson can't act, but he's no worse than anyone else in the cast. Girls vs. Gangsters is a Chinese rip-off of The Hangover, with three young ladies who plan a wild weekend before one of them gets married. After getting drunk at a crime boss' party, they wake up naked on the beach with no idea how they got there. Two of them are also handcuffed to a suitcase of gold bricks and, worse yet, the gangster's leather-clad henchwoman is after them. Most of the film has them trying to piece together the events of the previous night while running for their lives.

The film is a sequel to 2014's Girls, which I haven't seen. But if this one is any indication of writer/director Barbara Wong's abilities, I dodged a bullet. Girls vs. Gangsters is not-only laugh free, it's narratively vapid and offensively stupid. Every attempt at humor feels labored and desperate, with an abundance of scatological humor, leering shots of cleavage and even a rape joke for those who still think that shit is funny. The three lead characters are shrill, obnoxious and irritating caricatures who generate zero empathy and even less likability.

Again, none of this is Tyson's fault. In fact, his brief appearance ironically ends up being a welcome break from the three leads' constant whining, crying and shrieking. He's still terrible, but the fact he's arguably the best part of the movie should tell you all you need to know.

BLEH...LIKE COUGHING UP A HAIRBALL
Posted by D.M. Anderson at 9:36 PM