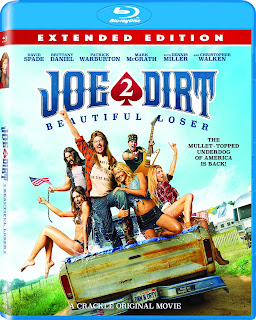 The most anticipated sequel of the year is finally here...on Blu-Ray!

Sure, it was great to see Max barreling down Fury Road and Han Solo once again piloting the Millennium Falcon, but let's be honest...the return of Joe Dirt is what we've all been pining for. Seeing comedy legend David Spade back in the role which made him an international superstar brought a tear to my eye. Never in my lifetime did I think I'd have the opportunity to enjoy the further adventures of this beloved, iconic character.

Released 14 years after the original film won the hearts moviegoers worldwide, Joe Dirt 2 was worth the wait. Spade and co-writer/director Fred Wolf obviously took the extra time to move the character in surprising and complex new directions, ingeniously incorporating the consequences of time travel in a way the Back to the Future trilogy only superficially hinted at. Loaded with symbolic imagery and poetic irony, this is a Joe Dirt for a new, more sophisticated generation. The numerous scenes of flatulence, assaults to the groin and sensitivity to modern day LGBT issues are so metaphorically-rich that one can't help but be moved. The scene in which our main character dry-humps a football may be the most emotionally-stirring moment committed to celluloid since Kevin Costner played catch with his father in Field of Dreams.

At the film's center, of course, is the mercurial David Spade, a virtual chameleon who once-again disappears into his role with an intensity that rivals Daniel Day Lewis. His performance has Oscar written all over it. Though he’s the heart of the picture, let’s not overlook the commanding supporting performances of Patrick Warburton, whose gift for dog-fucking jokes reveals surprising complexity, or Mark McGrath, given the unenviable task of stepping-in for cinematic icon Kid Rock from the original film, or every attractive female in the cast, who admirably transcend their inherent sexuality to give their cleavages much-needed emotional depth. As for the great Christopher Walken...he may have agreed to appear in this picture after losing a bet, but he still brings his usual touch of class to the proceedings.


Like all sharp satire, Joe Dirt 2 bravely skewers familiar pop culture tropes most filmmakers stopped bothering with decades ago, such as It’s a Wonderful Life, The Silence of the Lambs, Back to the Future and Forrest Gump. Yet somehow, everything old is made new again, thanks to the genius of Spade and Wolf’s dynamic wordplay. I don’t recall the last time I laughed this much during a single film. It’s scant 109 minute running time literally flew by like it was only three hours.

It’s also easy to see why Joe Dirt 2 originally skipped the theaters to premiere on Crackle, an online web channel. A film this important and relevant is a gift to be shared freely with the world, just like when U2 blessed every iPhone user with a free album no one asked for. Still, some of us take pride in collecting physical copies of classic films of high artistic worth. Having this film on Blu-Ray completes our Joe Dirt collection, so we can proudly display our impeccable cinematic taste to anyone who happens to spot it on our shelves.

NOTE FROM THE CEO OF FREE KITTENS MOVIE GUIDE: The preceding review of Joe Dirt 2: Beautiful Loser does not necessarily reflect the opinions of FREE KITTENS MOVIE GUIDE. I was unexpectedly forced to go out of town and, at the last minute, entrusted my neighbor, Otis, with feeding my cats and collecting my mail. I like Otis, but the man regularly hangs out naked in his backyard, drinks Pabst Blue Ribbon without a whiff of irony and thinks Nickelback is the next Led Zeppelin. I also made the mistake of leaving my computer on, during which time he wrote the review you just read. Sorry about the inconvenience.

BONUS FEATURES: None (if you consider this extended edition some kind of bonus, you must have masochistic tendencies).