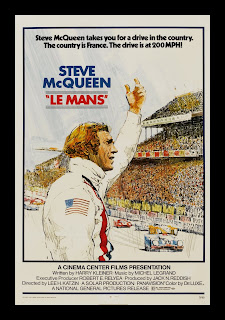 It must've been awesome to be Steve McQueen. Hell, the Rolling Stones and Sheryl Crow have even written songs about the guy.

McQueen had it all...women, wealth, power, fame. He was never what anyone would seriously consider a great actor, but who needs thespian skills when your greatest commodity is being the coolest guy walking the Earth? During his glory years (roughly 1960 to 1975), all he really had to do was show up on-set and be Steve McQueen, forcing co-stars, writers and directors to deal with his personal baggage. After all, this was a guy who had the balls to repeatedly lock horns with Yul-fucking-Brynner while making The Magnificent Seven. Pretty badass, if you ask me.

Sure, McQueen died at 50 and never made a decent movie after 1974's The Towering Inferno. But until then, when he wasn’t busy being the world’s highest paid movie star, McQueen fought, fucked, played & partied. Even though he probably didn’t leave a good looking corpse, he died with the most toys, so he still wins.

I think a lot of guys would gladly trade a few of their own relatively dull sunset years for a life like that.

Speaking of toys, McQueen’s favorites were automobiles & motorcycles, and he had one hell of a toy box. He collected exotic sports cars as casually as most of us accumulate lint. Not content with just collecting them, he played with them, too. McQueen loved motor-sports and competed in sanctioned events around the world.

In fact, he often parlayed his vehicular obsession into his professional life. The classic motorcycle chase in The Great Escape was included at his behest, where he did much of his own riding (though the film‘s insurers refused to let him jump the barbed wire fence). He also insisted on doing a lot of the driving in the iconic chase scene from Bullitt a few years later. Neither scene is actually better because of McQueen’s hands-on approach...he simply wanted to indulge his ego and get paid for playing with his toys on camera.

That self-indulgence would bite him in the ass, though.


By the late 1960s, Steve McQueen had enough clout - and probably nobody around to tell him no -  to shove a wall-to-wall racing movie down everyone’s throat. He even set up his own production company to make it happen. The result was 1971’s Le Mans (pronounced Le-MAH), featuring McQueen as Michael Delaney, a participant in France’s famous 24-hour endurance race.

This is essentially Steve McQueen at play, and he assumed we'd all enjoy watching...kind-of like YouTubers today who film themselves playing video games. Not only that, McQueen insisted on playing with his toys during the real 24 Hours of Le Mans in 1970. No, they wouldn't let him participate in the race itself (those damn Frenchmen probably felt emasculated by his overall McQueen-ness), but one of the camera cars was actually entered in the race and finished 9th overall.

Le Mans was an expensive and troubled production. The legendary John Sturges, who previously directed McQueen in The Magnificent Seven and The Great Escape, quit the film in disgust over the debacle. There were also numerous accidents and injuries during filming, including one stunt driver whose leg was amputated following a horrific crash. While the racing scenes themselves are some of the greatest ever shot (even by today's standards), it apparently never occurred to McQueen or anyone else that an actual story might have been a good idea.

Hence, the movie was a colossal flop. I guess McQueen severely overestimated how many people were really pining to watch him play. Kind-of sad, really, because despite its almost total lack of plot, Le Mans is actually pretty good, arguably better than the soap opera schmaltz of 1966's Grand Prix, a similarly-themed film to which it's often compared (and McQueen once considered starring in).

You can't watch Le Mans like you would a traditional film, but as a pure sensory experience, it's technically quite amazing and still highly-regarded by motor-sports enthusiasts as the definitive racing movie. You really feel like you're right there on the track with these drivers, a feat no other film has been able to accomplish before or since. It's definitely meant to be seen on the big screen, meaning your home theater system, no matter how elaborate, won't do it justice.

As for McQueen, seeing his vanity project go down in flames was probably ego-bruising at the time. But like all badasses, he shrugged it off and charged forward with such classics as The Getaway, Papillon and The Towering Inferno. Outside of the motorporn crowd, Le Mans has since been relegated to little more than a footnote in McQueen's long career. That's kind of a shame, because one can't help but think this was the one movie which mattered most to him because it came from his own personal toy box.
Posted by D.M. Anderson at 3:56 PM