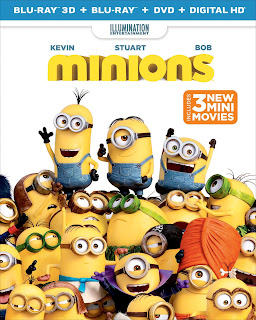 Minions is better than it probably had a right to be. These Tic Tac-shaped critters from the Despicable Me franchise may be funny and endearing in small doses, but giving them their own spin-off feature film seems like an exercise in overkill (not-to-mention a cynical excuse for pumping out merchandise). After all, Scrat the Squirrel remains the only amusing part of the increasingly-awful Ice Age series, but while he's a terrific peripheral character, 90 straight minutes of his antics would be like hearing your four-year-old repeatedly telling the same knock-knock joke and expecting the same response every time.

Fortunately, Minions is more of a prequel than an actual spin-off, so it has more to offer. Their ‘origin’ story is sort-of perfunctory. Essentially, the Minions have existed throughout time, and having a despicable villain to serve is essential to their survival (leading to some amusing segments during the prologue about how former masters met their demise). The rest of the film takes place in 1968, when three of the Minions (Kevin, Stewart & Bob) try to save their species by venturing out into the world to find a new villain, which they think they’ve finally found with Scarlet Overkill (Sandra Bullock), who wants to steal the Queen of England’s crown.


So at least there’s an actual plot on which to hang the Minions’ goofy antics, which are sometimes amusing, though it still helps if you’re a kid who can’t get enough of these guys. Still, patient adult viewers of a certain age will appreciate the attention to period detail and numerous cultural references, such as a truly laugh-out-loud nod to The Beatles’ Abbey Road album cover. Speaking of which, the film does a tremendous job incorporating classic songs from the era into various scenes, all of which fit perfectly (including The Beatles' actual recording of "Got to Get You Into My Life" during the end-credits, something which doesn‘t happen often...perhaps Sir Paul McCartney has a grandkid who loves this franchise).

Of course, the main emphasis is on the Minions themselves, with plenty of screen time dedicated to the same cute, slapstick situations which endeared them to audiences in the first place. While the film doesn’t really have a central character like Gru to keep it as focused as the Despicable Me films, I can’t imagine most kids not loving every minute of it. As for their parents, it’s worth enjoying with the family at-least once. But be prepared...the same knock-knock joke does pop up pretty often.

NOT BAD...YOUR KIDS WILL LOVE IT.
YOU? ONCE IS PROBABLY ENOUGH.