THEY LIVE and the Invaders from Planet Me 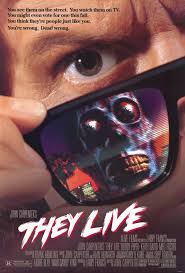 Run for your lives! We’re being invaded! And there’s probably nothing we can do about it! Before you call me a raging paranoid, hear me out!

I've been roaming this mortal coil for over fifty years now. While I'm not even remotely religious, I think I've led a reasonably righteous life. Sure, I've said and done things I'm not particularly proud of. And yeah, I've hurt some people along the way without meaning to. One time, in a blatant act of pure rebellion, I even removed the tag from a mattress, phoned the authorities and dared them to take me alive.

But for the most part, I’ve been a courteous, upstanding citizen my entire life, mindful of those around me, even if I don't know them personally. I always signal before switching lanes, pick up my dog's droppings at the park and hold the door open for others. I never talk once the movie starts, never use the 12-items-or-less checkout lane when buying a week's worth of groceries and never assume the world comes to a screeching halt whenever my cell phone goes off. None of this makes me a saint, and I don't expect accolades for these relatively menial gestures of common etiquette. I simply know that going about my daily business shouldn't be an inconvenience to others.

But as I get older, I’m made increasingly aware that a huge percentage of the population didn’t get the same memo. Most may not be inherently evil or immoral, nor do they necessarily venture out into the world with the deliberate intention of making other’s lives more difficult (if even for a few moments). But the fact remains many folks seem completely self-absorbed and oblivious of others. But isn't an intellectual and empathetic awareness of our environment what supposedly places us a few rungs above our primate cousins on the evolutionary ladder...along with frozen pizza?

If that's true, it can only mean one thing: we’re being invaded by creatures from Planet Me. It's a place where millions live, thrive and reproduce, yet the population remains constant...ONE. On Planet Me, there is no one but yourself, despite others of your species milling about. They live on Planet Me, too, but it’s their own Planet Me, meaning there are probably enough of Planet Me's to fill an entire galaxy.

Try this simple experiment. The next time you go to a public place like a crowded mall, simply walk straight ahead, making zero effort to move out of the way of those approaching from the opposite direction. Keep count of the overwhelming number of others with the complete expectation that you’re the one who'll step aside. In fact, it never even occurs to them to make a half-assed effort to do the same. On Planet Me, you, my puny Earthling friend, don't actually exist.

We may gasp or laugh at annually-posted videos of animal hordes fighting to the death on Black Friday for Walmart's last flat screen TV. But as barbaric as they are, at least those people are demonstrating an awareness of their environment and a conscious - decidedly human -  effort to fuck over their fellow man, behavior they likely wouldn’t dream of engaging in on any other day of the year. Not only that, those brave enough to venture out on Black Friday are totally prepared for battle, fully mindful of the lion's den they're about to enter.

But invaders from Planet Me live an insidious life of quiet egocentrism 24/7 - at work, behind the wheel, at the check-out counter - completely indifferent to how their frequent acts of self-absorption affect others on the daily basis. While we can easily avoid encountering Black Friday barbarians by simply staying home, invaders from Planet Me are everywhere, everyday. Like ants, they’ve lurked among us for years and have learned to adapt to our world. They aren’t easy spot on the street (unless they’re driving) because they've cleverly disguised and ingrained themselves as upstanding members of what we euphemistically call civilization. But they’re out there, their numbers are legion and they’re stealthily colonizing our world, one cellphone shitstain at a time.

You might be asking yourself, “Hey, Dave, if your theory is true, how do I know if someone I suspect is actually a creature from Planet Me?”

There are some tell-tale clues and giveaways which the trained, observant eye will notice. Short of having a pair of special sunglasses which allow you to see them as the aliens they really are, watch for the following signs:
I could go on, but you get the idea. Chances are you've already been in contact with creatures from Planet Me without even realizing it. Worse yet, there isn’t a hell of a lot you can do about it. These creatures are so ingrained in our society that we ourselves have been subconsciously conditioned to accept them. Calling them on their bullshit would likely make you look like an antisocial asshole.

Kind of like Nada in John Carpenter’s They Live.


Roddy Piper is Nada (though he's never mentioned by-name in the film itself), a lowly drifter simply looking for an honest day’s work. While he finds employment at an LA construction site, he’s still living day to day, paycheck to paycheck, confident that if he works hard enough, good things will come to him.

All that changes when police raid and destroy the shantytown where he’s shacking. In the aftermath, he comes across a box of special sunglasses which allow the wearer to see the difference between the haves and have-nots. Most of the haves are hideous aliens who’ve been discreetly infiltrating Earth with the purpose of depleting its resources, using subliminal technology to appeal to people's inherent greed and quest for personal gain, essentially hypnotizing them into becoming self-obsessed consumers.

After going on an alien killing spree, Nada becomes a fugitive and soon joins a small band of fellow resistors hell-bent on exposing this threat to the world. However, despite a superficially 'happy' ending, the film’s extraordinarily pessimistic view of human nature negates any notion that the human race is actually saved. It turns out many people Nada encounters are already aware of the alien presense and have willingly sold out their own race in exchange for wealth and status, despite how badly it will fuck-over the rest of the world. So the Earth depicted in They Live is actually being invaded by two alien species...the stealthy silver-eyed monsters from another world and those who’ve obviously declared their allegiance to Planet Me.

Despite many clever amusing satirical moments, a surprisingly effective performance by Piper and a prolonged fight scene that's now considered classic, They Live is a bitter, angry film that was relatively unappreciated back in 1988, when John Carpenter’s Hollywood luster was just beginning to wear off. But like much of his other work of the period, it's garnered a considerable cult following over the years, perhaps because Carpenter infused it with interesting themes and social commentary disguised as science fiction. Like Don Siegel’s Invasion of the Body Snatchers, a thinly-veiled depiction of conformity in-light of communist paranoia in the 1950s, They Live offers a similarly sinister threat: creatures ruling over a population blinded by their own self-absorption.

In a way, with our current influx of invaders from Planet Me, They Live may be more timely than ever.

But fear not, fellow Earthlings. I've got your back. I'm hard at work in my garage every weekend trying to develop my own pair of special glasses that will allow you to spot someone from Planet Me in a heartbeat. They'll be the ones whose face suddenly resembles the ass end of a horse. Don't try to fight back, though, because you're probably hopelessly outnumbered.