THE BLOB (1988) and the Horrible Holiday Hell 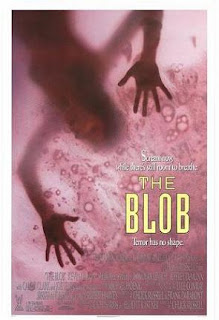 Like most families, mine has certain holiday traditions. We always watch A Christmas Story after putting up the tree. In the days leading up to Christmas, my wife makes caramel corn, Chex mix (my favorite), candy cane cream puffs and sugar cookies, the last of which the whole family has a hand in decorating. And because of our relatively twisted nature, at least one of us will come up with some kind of anti-Christmas cookie, like a demonic snowman or a reindeer riddled with bullet holes.

We also visit my folks' house on Christmas Eve to exchange gifts and sit down to a formal holiday feast. It's a ritual I've grown to despise and fear over the years.

Not because I don't love my parents. On the contrary, they're wonderful people. We've generally gotten along really well over the years and they've always been there for me through good times and bad. They welcomed my wife into the fold with open arms and have spoiled my kids the way all great grandparents do. And Christmas is the time of year Mom seems to live for, planning waaay in advance to make sure the approaching holiday goes off without a hitch. In fact, we're expected to have our Christmas lists ready in July.

Still, I dread visiting their house on Christmas Eve...because they have a dark side.

Well, maybe not Dad. As far as I know, his post-retirement routine consists entirely of bowling, fantasy sports and a little off-track betting on the side. I'm pretty certain he's involved in little of the domestic decision making. Like most smart spouses, he defers to his wife, which I've learned to do as well. That way, if the shit hits the fan, we can blame them (silently, of course). Still, he's the one who married Mom, so he's guilty by association.

Mom definitely has a dark side, which only comes out during the holidays. Oh sure, she's all smiles when we show up on Christmas Eve, happy to see us and showering everyone with hugs and kisses. But I know better because I grew up baring witness to her dark side, which I once tried to warn my wife about, only to see her succumb to Mom’s insidious influence.

Just this past year, when we arrived at my parents’ house with gifts in-hand and warm greetings all around, my palms were already sweating because I knew what lurked within. Dad knew too, but was playing dumb as usual (probably what's kept him alive all these years). He even shot me a sympathetic gaze. Mom, of course, acted like everything was hunky-dory.

While my wife engaged in small talk with my parents, I slowly crept toward the kitchen to grab a beer, each step ringing loudly in my ears. Once I reached the fridge, I swallowed hard, dreading what I’d find when I pulled the door open, yet certain it would be there.

Like ripping off a Band-Aid, I bit the bullet and threw open the refrigerator door. Sitting on the third shelf in a 9” x 12” Corningware dish, like it does every Christmas, was the source of my holiday horror...

For those of you unfamiliar with this supposed ‘dish,’ Tomato Aspic is a concoction of gelatin, tomatoes, peas, celery, Tabasco, hard-boiled eggs and whatever-the-fuck-else happens to be in the fridge at the time. Worse yet, it’s served cold. Just looking at it is like viewing the colonoscopy of a demon’s bowels. Even writing about it now, picturing my mom, wife and sister forking it into their mouths, sometimes with a dollop of fucking mayonaise on top, triggers my gag reflex. For some reason, this satanic slop never caught-on with any of the males in my family (Dad included). Not to sound sexist or anything, but perhaps men are simply more aware that just because a dish technically consists of food products doesn’t necessarily mean it’s edible.

Mom claims there’s an actual recipe for Tomato Aspic, but I don’t believe that for a second. Who the fuck would ever consciously decide any of these random ingredients fused within a jiggling, gelatinous mass would constitute good eating? Not even during my stoner years, when peanut butter, Cap'n Crunch and bologna made a good sandwich, would the ingredients of Tomato Aspic seem remotely compatible.

It’s this time of year I’m convinced my mom may not actually be Mom at all, but an insidious alien whose plan for world domination begins with sticking a seemingly-harmless dish of goo in the fridge, which in-turn comes-to-life and commences mindlessly consuming its surroundings. Once it’s good and loaded with remaining leftovers from the previous few weeks, it literally wills the women in our family to wolf it down, who then sing its praises to anyone within earshot.

Every year, my sister says to me between mouthfuls of this shit (goo dripping down her chin), “How do you know you won’t like it until you’ve tried it?” But there’s always something sinister in her blank stare & monotone drone, like someone from Invasion of the Body Snatchers. Was it her or the aspic doing the talking?

Besides, I don’t need to try it. After all, one glance at a steaming pile of dog shit in the yard is enough to know it isn’t meant to be consumed. And while I love my wife, I refuse to kiss her during this holiday get-together because I know she has aspic on her lips.

That’s what scares me each Christmas Eve at my folks’ house...this hideous dish, lurking like a predator on the third shelf, practically daring me to destroy it, which I tried one year, only to discover it's impervious to fire (though Mom's kitchen curtains weren't) and bullets just make it mad.

It’s even more terrifying once it’s dished up and rendered shapeless...

You know what it looks like? The Blob. Not the cartoony 1958 Blob, but the upgraded-for-the-80s Blob, a slimy, formless mass which consumes its victims by absorbing them as graphically and disgustingly as possible, just like Mom’s aspic does as it patiently sits - and waits - behind the refrigerator door.

The 1988 remake is actually pretty cool, if relatively unappreciated today compared to other remakes of the time like The Thing and The Fly. Though some of the special effects haven’t aged all that well, The Blob does feature one of the all-time great death scenes in horror, when a poor rube is completely sucked into a sink drain, even though he obviously can’t fit through in one piece. It’s moments like this gore fans live for and this scene doesn't disappoint. The new version also violates a long-held taboo (at least when it comes to major studio productions) by not only killing a child character, but rendering his death one of the most graphic and sickening in the entire film.

Unlike the original, where the blob was simply a gooey monster from outer space, this one is the result of the government’s attempt to develop a biological weapon, a far more timely concept for a cynical generation that doesn’t place blind faith in authority figures. The fact that the government swiftly arrives to sacrifice an entire town to keep their creature a secret is actually fairly disturbing, mainly because it doesn't seem all that far-fetched. It also has me wondering if my mom isn’t part of a similar conspiracy.

I hate to think this way about Mom because I sprang from her loins. However, Grandma hasn't shown up during the past few Christmases. No explanation has ever been given for her sudden disappearance from our annual get-togethers, but during the last Christmas Eve I ever saw her, she hobbled to the kitchen to grab more wine (of which she always consumed plenty) and never returned to the family room where the rest of us were enjoying the holiday. Mom simply shrugged and suggested Grandma was merely tired and went to bed, while Dad offered a sheepish grin and nodded obediently (nervously shifting his eyes to the fridge).

Yet, the next morning, Christmas Day, there it was...Mom’s aspic atrocity, once-again completely intact in its usual Corningware dish, despite having-been mostly devoured the night before. Grandma was gone, yet this foul food had returned for the women to enjoy, all of whom ravenously slurped the pan clean yet again. But what did they consumes this time? More eggs? More vegetables? A stray cat? Grandma? I didn’t know, nor was I willing to find out. There are some questions you simply don’t want the answers to.