THE BIG LEBOWSKI and the Oregon Flower 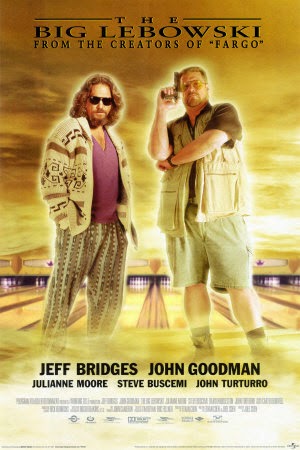 Oregonians of a certain persuasion rejoiced the recent passing of a bill which legalized marijuana. It was a hard-fought victory, but after previous election years when the bill went down in defeat, we are now finally free to include bong hits and Bob Marley as part of our nutritious breakfast. It was made legal in Alaska as well, but that seems a bit redundant since marijuana can’t grow in snow.

But now that Oregon has sided with such smokin’ states as Washington and Colorado, it’s looking like the West Coast is slowly becoming a happier place than the East. Sure, weed was also made legal in Washington D.C., but I suspect this was an intervention by God to show he has a sense of humor. After all, isn’t it ironic this bill was passed at almost the exact time Marion Barry, the hardest-partying mayor in D.C. history, kicked-the-bucket?

So yeah, as a lifelong Oregonian, I’m rejoicing too, though maybe a tad resentful at the timing. Where the hell were these hemp-happy heroes back in the days when I used to smoke this shit, forced to score two-finger dime bags from a nearby neighbor who lived in black-lit squalor among Led Zeppelin posters and stacks of discarded Domino’s pizza boxes?

Still, even though I no longer indulge in wacky-tobacky (and have no desire to), this bill’s passing is a great thing. Beyond the immediate economic benefits to our state, not to mention those who own stock in 7-Eleven, Oregon’s legalization of marijuana has inspired me to grab my share of the American Dream…

And I don’t mean opening a little boutique in the hipster part of town where nappy-headed white guys buy their sandals. I’m talking mainstream…a weed-related Wal-Mart for the cannabis culture, the one-stop superstore for everything you could possibly need. In addition to a wide selection of weed from around the world, our grocery section will carry isles and isles of Twinkies, Pepsi, Hot Pockets, Fritos, Cap’n Crunch and all flavors of that easy-to-prepare favorite, Top Ramen. You’ll also want to visit our bakery for the best brownies north of Mexico.

Furthermore, if a household object can be fashioned into a makeshift pipe, you’ll find it in Hardware. Our Home & Garden department will meet all your indoor agricultural needs. We’ll have a wide selection of pajama bottoms and concert tees in Apparel. You’ll enjoy our wide variety of lava lamps, incense, black lights, Jim Morrison tapestries and paintings of poker playing dogs in the Home Décor isle, and don’t forget to visit the Furniture department to test-drive all of the big cushy recliners. In addition, our Music department carries everything from Santana & Pink Floyd to Santana & Pink Floyd…all on vinyl, of course.

But aside from a few bowling balls, we won’t waste precious floor space with sporting goods & fitness equipment. You already knew that, though.

Best of all, we’ll give away free copies of The Big Lebowski with every purchase. If you find yourself asking why, then you’ve either never seen the film, or never fired-up a J. The Big Lebowski and weed go together like wine & cheese, Martin & Lewis, cops & donuts. It’s the most repeatedly watchable, infinitely quotable movie ever made, even without chemical assistance. Watching the film while sparking-up a fat one must be as awesome as dunking fries into a chocolate shake.

I say ‘must be’ because The Big Lebowski was released in 1998, a full decade after my last bong hit, so I’m sad to say I’ve never actually experienced this movie enhanced by anything other than a beer in my hand.

There are scores of other beloved films that get better with each suck on the pipe. Hell, who didn’t love zoning-out in a smoke-filled living room to the surreal pleasures of Heavy Metal, Pink Floyd The Wall or The Song Remains the Same? But most of those movies are actually pretty terrible when you watch them sober, which I can attest to. I once championed Heavy Metal as the greatest adult animated film of all time, only to revisit it ten years later - married and drug free - and recognized it as the godawful piece of sleazy, juvenile shit it really is. I was almost embarrassed to admit I once enjoyed it.

But the difference between The Big Lebowski and Heavy Metal is the Coen Brothers didn’t have stoners in-mind while making it. Its story is mostly an homage to Raymond Chandler potboilers, only the main character happens to be a complete slacker (yet turns out to be the most normal guy in the entire film). Part of its genius (besides the characters, dialogue, music and individual set-pieces) lies in the fact we’re duped into thinking we’re watching an intricate story unfolding, when in reality the movie is almost plotless, which we don’t really realize until after it’s over. If you don’t agree, just try to summarize the story to somebody in just a couple of sentences.

The Coen Brothers have made films which earned more money, awards and critical accolades, but The Big Lebowski has arguably had the biggest cultural impact. Even star Jeff Bridges has made it obvious he still loves being The Dude (if in doubt, watch Tron: Legacy again and try to convince anyone he’s not revisiting his inner Lebowski).

What better movie to give away at the grand opening of my Weed-Mart than the one film which makes it okay - even cool - to be a middle-aged slacker? In the real world, few of us can realistically aspire to be as heroic as John McClane, Atticus Finch or Bruce Wayne. But The Dude? Yeah, that seems feasible. And what better way to drum-up business for my superstore than a cinematic reminder that indulging in a bit of ganja now and again is perfectly okay?

The Big Lebowski still ranks among my favorite films, but one of my few regrets in life is I’ve never actually enjoyed it while stoned. I envy those who have, for whom it must have been an out-of-body experience. It’s such a perfect film that, if members of American Film Institute were smoking the same shit as The Dude when compiling their annual list of the greatest cinematic achievements of all time, they would probably knock Citizen Kane from its spot at the top.
Posted by D.M. Anderson at 9:17 PM