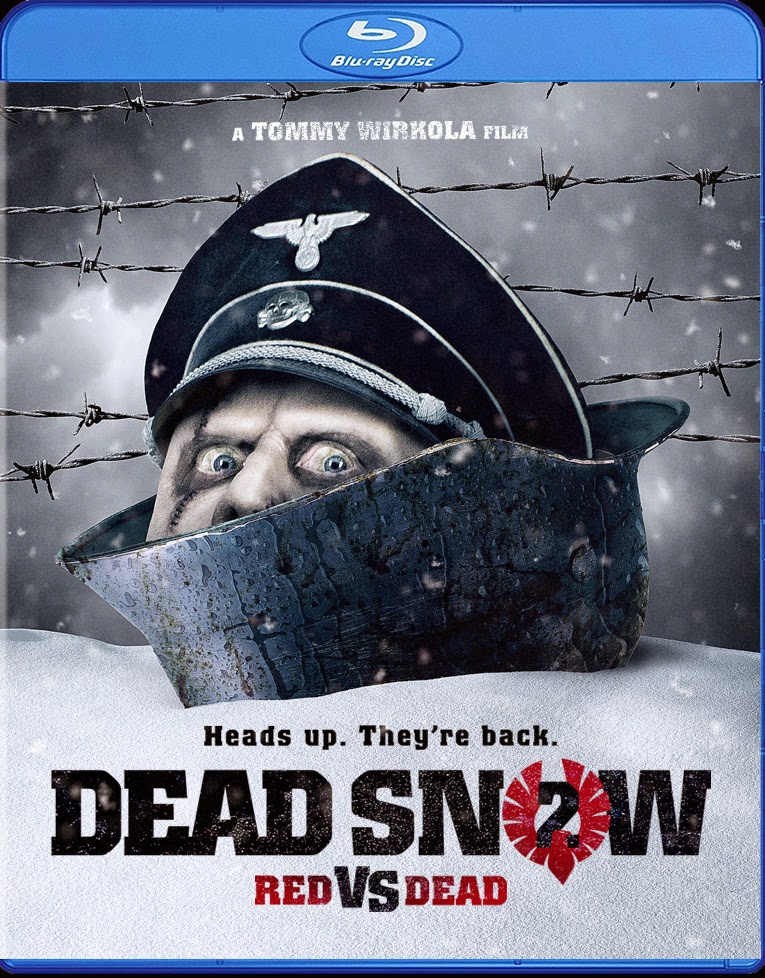 Early in this film, an elderly man, aroused by a newspaper photo of a scantily-clad girl, tells his wife to take out her teeth because he’s in the mood for some head. Immediately afterwards, her bloody severed noggin is tossed into his lap.

Later, our hero threatens a gay store clerk, who helplessly raises his hands and begs, “Please don’t kill me! I have two kittens!”

If either of these scenes strike you as funny, you’re gonna love Dead Snow 2: Red vs. Dead. Subtlety is not one of its virtues.

Director Tommy Wirkola is obviously a big fan of Sam Raimi’s Evil Dead franchise and Peter Jackson’s early films. Those influences were proudly on display in the original Dead Snow, a surprisingly amusing zombie flick in which undead Nazis return to claim a cache of gold discovered by some hard-partying tourists. That film was bloody as hell, but had a quirky playfulness which rendered the extreme gore part of the fun. Like the best zom-coms, Wirkola skillfully balanced laughs and shocks in equal measures.

Naturally, Dead Snow 2: Red vs. Dead is bigger and broader, taking the Evil Dead 2/Army of Darkness route by putting a greater emphasis on splatstick humor than actual scares. As such, this film is an improvement on the original.

This one picks up right where the original left off, with lone survivor Martin (Vegar Hoel) still trying to escape undead Nazi commander Herzog and his soldiers. It turns out they have a bigger agenda than retrieving their gold, which is to complete a mission assigned to them by Hitler before they died…taking revenge on townfolk of a Norwegian village who revealed the location of a German warship during World War II. Not only that, Herzog now has the power to raise fresh corpses to replenish his army.

Meanwhile, Martin, who cut off his own arm in the first film after being bitten, wakes up in a hospital with Herzog’s severed appendage attached to him (an amusingly-unfortunate turn of events). The police already suspect Martin is responsible for the slaughter of his friends, not helped by the fact this zombie arm seems to have a mind of its own, forcing him to kill several people during his escape. These scenes are gruesomely funny, and Hoel’s performance is what makes these gags work. Now free, he manages to contact the Zombie Squad, a trio of geeky Americans led by Daniel (Martin Starr), whose experience in fighting the undead is regulated to movies they’ve seen. Their shock in confronting actual zombies for the first time provides a lot of laughs and satirical moments.

Martin also discovers, not only does his new zombie arm give him incredible strength, he has the same power as Herzog’s to raise the dead to do his bidding. And what better corpses to awaken than a batch of Russian soldiers once captured and killed by Herzog during the war? This leads to a climactic and bloody zombie-on-zombie battle in the town Herzog came to destroy.

Again, the emphasis is on laughs, which Dead Snow 2 mostly earns, much like the best over-the-top moments of Braindead and Evil Dead 2. Some gags border on tasteless (such as the killing of children and babies), but the goofy tone of the film makes these scenes pretty easy to digest. Not everything works, though. The scenes involving an inept squad of Norwegian cops are almost insultingly stupid and have absolutely zero impact on the story. But most of the other characters are quite likeable (or at-least entertaining), including a hapless-but-loyal ghoul resurrected by Martin.

As for the violence, Dead Snow 2 is ultra-gory, but so extreme in its depiction of bodily dismemberment (through practical effects and CGI) that it’s difficult to take any of these scenes seriously. After all, this is a movie featuring zombies using intestines to siphon gas from a vehicle. In other words, everything, no matter how brutal, is totally tongue-in-cheek.

Dead Snow 2 doesn’t quite reach the giddy heights of Evil Dead 2, nor is it as funny as Shaun of the Dead or Zombieland. But it’s entertaining nonetheless, with great performances and an absolutely hilarious coda that’ll forever change the way you hear that awesomely-bad 80’s hit, “Total Eclipse of the Heart.”