THE EMPIRE STRIKES BACK and Kids These Days 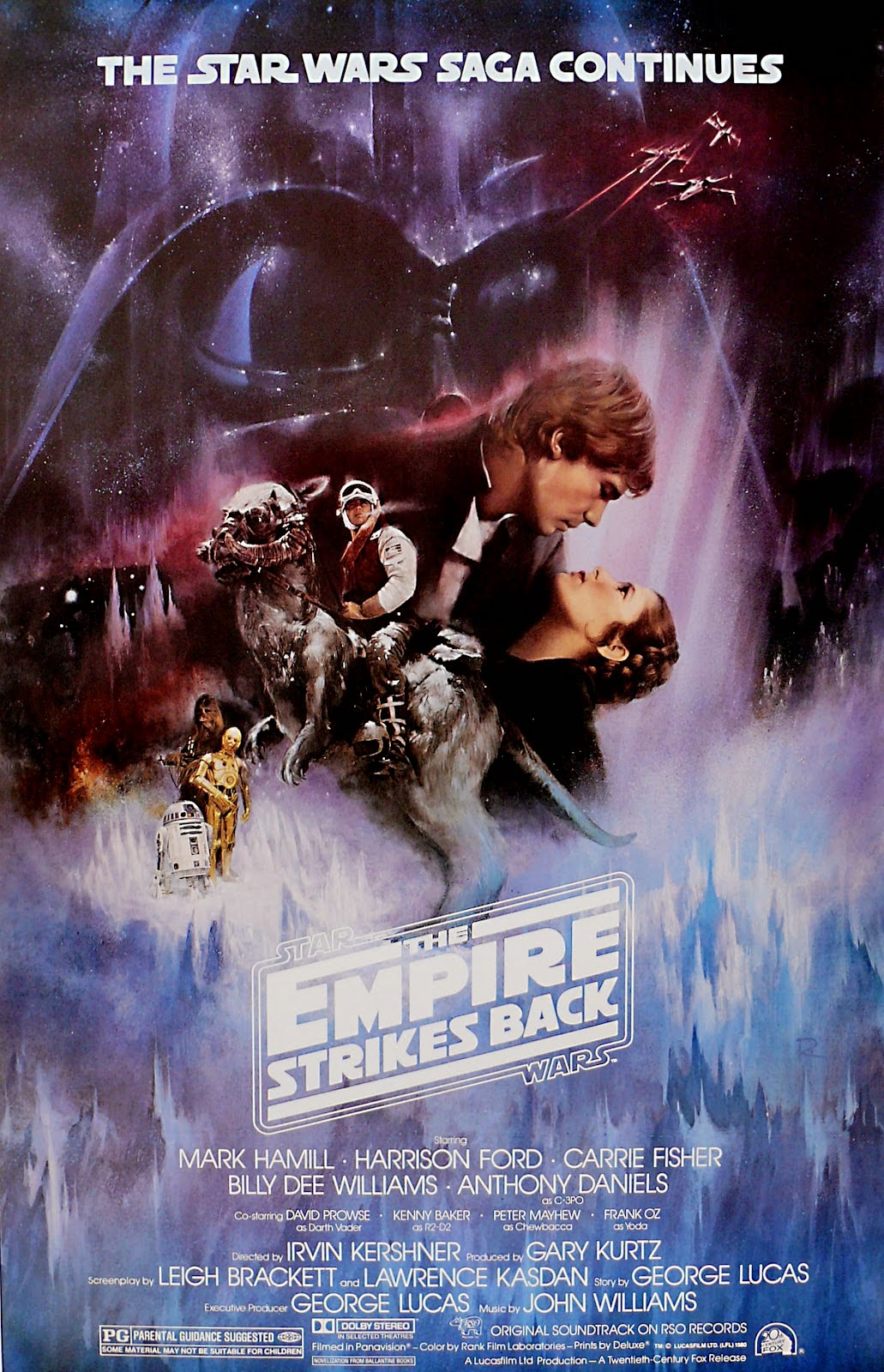 You silly kids these days...with your WiFi and your Facebook and your Tweets. Back in my day, we had to actually call our friends, and we couldn’t walk more than ten feet from the phone without pulling it off the wall. We would hang out with those same friends at a place called the mall. And none of us were so important that we felt our lives were worth constantly summarizing in 140 characters or less.

We only had three-and-a-half TV channels to choose from (the 'half ' was PBS, because who the hell watches PBS once they’ve outgrown Sesame Street?), and our shows only aired once a week, one episode at a time. Reality TV was called Cops, and we never turned any of those shitfaced & shirtless wife-beaters into celebrities.

As for movies…you kids don’t know how good you have it. Back in my day, if we didn’t see a film in a theater, it could be years before it showed up on cable or home video (and we had to rewind the goddamn tape when we were done!). Not only that, blockbuster movies played at only one or two theaters in town, making them seem like a big events. In the case of the original Star Wars, this meant not only talking my dad into carting my friends and I across Portland, but waiting in a two-hour line for tickets to a movie that had already been playing for several months (it was worth it, of course, though Dad would disagree because he was missing the 49ers on TV). So to all you young 'uns who think wading through the flock of other fansheep to catch Mockingjay Part One on opening night is a big deal…shut the hell up.

Speaking of Mockingjay, back in the day, you always got a whole movie for your three-dollar ticket (yeah, you heard that right…three bucks). Any Part II or III or IV was a sequel, not the second half of the same goddamn story. There was none of this ‘to be continued’ bullshit, a gimmick once-reserved for soap operas and season finales of Dallas.

Wait a sec...that’s actually not entirely true. One guy had the audacity to commit such an atrocity on us fanboys back in 1980...a guy by the name of George Lucas.

After Star Wars became bigger than Jesus, even the most-clueless moviegoer knew a sequel was inevitable. And really, there was no other movie more ripe for franchising than the adventures of Luke Skywalker & friends. So three years later, everyone who took Star Wars into their hearts (which was essentially everybody but my dad) found their place in yet-another two-hour line for The Empire Strikes Back. Now able to drive across town on my own, I was there on opening night. I brought a date, Susan, but since she was just as big a Star Wars fan as I was, I’m pretty sure she mostly agreed to go out with me because I had the means to get her there. She was a good kisser though.

The Empire Strikes Back was nothing-short of mind-blowing. Far more than just an obligatory sequel, Empire expanded on the original, giving established characters increasing complexity and plopping them into a darker story which confounded our expectations at every turn. After all, we’d previously been led to expect Leia would eventually hook-up with Luke, not a scoundrel like Han Solo!

Then there's the mother of all movie bombshells, when Darth Vader reveals he’s Luke’s father. Sure, we all know this now, and I doubt anyone batted an eye when I just revealed such a spoiler. But back in my day, there weren’t thousands of fanboy websites or social media outlets happy to dish-out every conceivable plot twist before a film was even released. Back then, on opening night, the jaws of everyone in the theater dropped to the floor in unison. Absolutely nobody saw it coming.

Darth Vader’s revelation was one of the greatest plot twists in movie history and, sorry kids, you just had to be there to appreciate it.

Then the second shoe dropped…Empire ended with Han frozen in carbonite and Luke’s future as a Jedi uncertain. Even though it told a completely satisfying story on its own terms, the goddamn movie had a cliffhanger ending!

What??? No coda??? No last-second heroics to reassure the audience everything turns out okay??? Are you fucking KIDDING me???

Speaking of which, those of you who’ve blindly (and gullibly) accepted Hollywood’s increasing practice of needlessly turning books into two-part films in order to bilk every last cent from a franchise, you shouldn't bitch about the wait between installments of The Hobbit and The Hunger Games. At least that wait wasn't three years long.

That's how long we were all forced to wait for Return of the Jedi to come and end our agony. And in the interim between films, there were absolutely no hints, clues or spoilers accessible with the click of a mouse. Furthermore, unlike taking a 300 page novel like The Hobbit and milking three films out of it, we never had the impression the open-ending to The Empire Strikes Back was anything but a stroke of creative genius, an homage to the serialized Flash Gordon shorts made in the 1930s, when kids were encouraged to return to the theater the following week to find out what happens next. After all, those old films were a major inspiration to George Lucas in the first place. It’s this dark, open-ended coda which arguably makes The Empire Strikes Back the best film in the franchise from a dramatic perspective.

People also tend to forget George Lucas paid for Empire entirely out of his own pocket in order to retain complete creative control. While wisely handing the directorial duties to Irwin Kershner, this was a huge gamble because there was still no guarantee of success. The Exorcist was a pop culture phenomenon only seven years earlier, yet Exorcist II was notoriously laughed off the screen. For Lucas to end Empire with a cliffhanger…man, that took serious balls, especially since no one had attempted such a thing in decades (at least on this scale).

Today, The Empire Strikes Back is widely considered to be the most character-driven and emotionally satisfying film in the whole franchise, not-to-mention one of the greatest sequels of all time. But believe it or not, many initial reviews of Empire were not exactly complimentary (perhaps because it wasn’t as much mindless, aw-shucks fun as the original). It’s probably hard to believe now, but I’ll bet ol’ Lucas downed a lot of Pepto Bismol back then, especially with a $27 million on the line.

You spoiled kids, with your iPads and social media, will probably never get to experience any cinematic phenomenon on the level of Star Wars, to say nothing of the shocking revelations like those in The Empire Strikes Back. If the film were made today, you'd probably already know who Luke's old man was before he did.