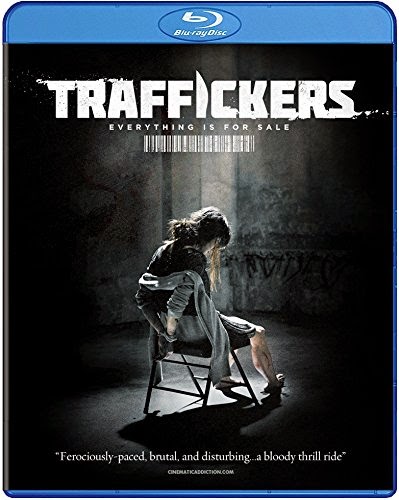 “Picture Teong-gyoo,  a low-life criminal who was once the biggest smuggler of body parts in all of Korea, where he and his crew of fellow scumbags would lure unsuspecting rubes onto a cruise ship, abduct them, then harvest their organs to sell on the black market. After one particular assignment goes bad, he retires and settles for being just another drug dealer, at least until he’s forced to do one last job in order to erase the debt he owes a local gangster. So he reassembles his crew of psychos, morons and perverts to snatch the heart of a wheelchair-bound woman while she and her husband are heading to China for a vacation. He’s also smitten with Yoo-ri, a waify young woman who’s also on the ship because she’s forced to do business with the same gangster to get her father the heart transplant he needs to survive. Oh, and did I mention this guy is the hero of the story?”

I suppose it’s a credit to director/co-writer Hong-seon Kim that he manages to (almost) make us root for Teong-gyoo, even though he’s long-been involved in a trade where innocent people are abducted and murdered for their organs. But the bottom line is, because of his affection for Yoo-ri, he’s only slightly less reprehensible than the low-lifes surrounding him. Traffickers is a movie loaded with characters whose contempt for human life is pushed to the forefront, practically rubbing their overall shittiness in your face.

Personally, I have no problem with movies in which every character is a scumbag, so long as the story is worth telling. However, Traffickers takes a looong time to finally get interesting. When it does, despite a few suspenseful moments, it becomes overly-complicated, with too many gratuitous scenes designed to confound the viewer by throwing in plot twists and last-second revelations, none of which redeems anyone involved.

Even though the characters are painted in broad strokes, Traffickers is well-acted by a game cast, all of whom go a long way in making the repellant nature of the material just a bit more digestible. Speaking of which, while there are a few fairly graphic scenes of gory violence, they are mostly relegated to characters who deserve what’s coming to them. To its credit, the film never descends into the torture porn it could’ve been. But ultimately, while Traffickers is watchable, it’s saddled with an overly-complex plot, along with characters who really don’t deserve the amount of time or empathy required for us to care about them.