ROPE: What Are We Looking For? 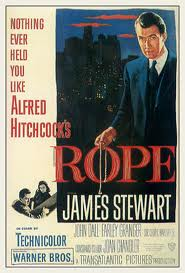 As a movie lover, of course I love Alfred Hitchcock...Psycho, Rear Window, Lifeboat, North by Northwest, The Birds and Vertigo. But my personal favorite is 1948's Rope, one of Hitch's less-renowned films, and seldom mentioned among his classics. It's also one of his more experimental and 'gimmicky' movies, the gimmick being that it takes place entirely on a single set and made to look like it was all shot in one long take.

The movie's about two guys who decide to kill one of their friends just for the hell of it, then arrogantly stash the body in the same room where they are hosting a party. One of those invited is their former college professor, Rupert Cadell (James Stewart), the sharp and cynical mentor they both look up to. Cadell is also the one person invited who seems to sense something askew about the whole set-up. Stealing the show is John Dall as Brandon Shaw...smooth, slimy and conniving as one of the killers, and so enamored with his superior intellect that he can't fathom the notion that anyone will catch him.

It's a fast, fun and twisted little movie, and also controversial for its time because of its supposed gay subtext. I never caught that, probably because I wasn't looking for it (or maybe I'm just stupid). But the film was inspired by real-life killings perpetrated by Nathan Leopold and Richard Loeb, two intellectual thrill-killers who were rumored to be homosexual. Add the fact that both Dall and co-star Farley Granger were gay in real life, and Rope had a few folks up-in-arms back then.

But again, I never caught all that when I watched it for the first time. I just thought these two dudes were roommates, not doing each other. Even after researching the background of Rope and watching it numerous times since, I simply just don't see any hint in the film itself that these killers are gay. Nor does it have any baring on the plot. 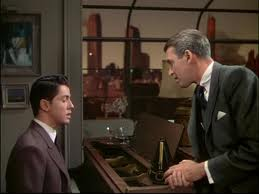 "How 'bout pounding out a little Iron Maiden?"


Which begs me to question why, even now, we spend so much time looking for homosexuality in entertainment. Why are we so obsessed with whether or not character is gay? Do we still look at homosexuality as some kind of lurid, provocative and titillating lifestyle? Maybe, because even though I've never given two shits about someone's sexual preference (other than my wife's), whenever I see two guys of the same age grocery shopping together, I tend to assume they are partners. This upsets me a bit because...why would I automatically think they're gay? What the hell is wrong with two guys shopping together?

Nothing, of course, but it doesn't stop me from making such an assumption. Was this the same assumption folks made back in 1948 when Rope was released? Since there's nothing in the script itself which hints the two killers are gay, did viewers simply come to this conclusion because they share an apartment? Are we simply conditioned to look for a character's sexual preference?

Still, none of this lessens my love for Rope, a simple story told in an unusual way (for its time, anyway). I think it's Hitchcock at his most flamboyant, yet economical. To me, it's just a movie where we watch two arrogant criminals fuck-up their so-called perfect crime. The movie transcends the weighty, societal baggage others have attached to it in later years.

You want to find homosexual subtext in a movie? Try watching Tremors and wonder what's going on in that tiny trailer Val and Earl share together in the middle of the desert.
Posted by D.M. Anderson at 3:38 PM