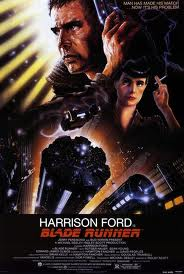 This came out when I was 18, and man, I couldn't wait to see it. New action hero Harrison Ford, fresh from two Star Wars movies and Raiders of the Lost Ark; Alien director Ridley Scott...how cool was that? Then there was the trailer depicting Los Angeles in the future...flying cars, impossibly-high pyramids & skyscrapers towering over a neon wonderland, with hellish flames spewing into the night sky.

So of course I was one of the first to see it on opening day. And indeed, with the opening shot...mind officially blown. Blade Runner's Los Angeles made the futuristic city of Logan's Run (made only five years before) look like it was made of Legos. This was gonna be great.


Then I spent the remaining time waiting for it to get great. Hell, I was rooting for it to get great. I even periodically checked my watch (which I seldom ever do unless a movie really sucks) seeing how much time was left for it to get great. About half-way through, I even went out to the lobby to refill my popcorn, basing my decision on the oft-proven theory that the second one runs to use the bathroom during a football game, that's when the game-changing play occurs. When I returned to my seat five minutes later, nothing had changed. In fact, it was still on the same dull scene as when I left.

Then the movie ended, and it never got great. It was long, slow, boring and had no characters who were interesting or even likeable. And I wasn't the only one who thought so at the time. Today, Blade Runner is widely considered one of the greatest sci-fi movies of all time. Back then, it tanked at the box-office, and  wasn't much of a critical darling, either.

But it developed a huge cult following over the years. Aside from its visuals, fans loved the questions it raised about humanity and existence. Some critics even reassessed their initial opinion of the movie. There were a couple of times in college, where cult movie appreciation can sometimes border on obsessive, when I made the mistake of expressing my ho-hum opinion of the movie. I was often met with incredulous responses.

“How can you be a sc-fi fan and not love Blade Runner?” I'd be asked, either verbally or through dumbfounded expressions. Either way, the message was clear: I must be a dumbass. How could anyone other than a dumbass not absolutely love what is arguably the most intelligent American science fiction film since 2001: Space Odyssey?

I was 18 when I first watched it, so maybe I did miss the big picture. Maybe, a few years later, without having the expectation of another spectacle like Star Wars, I could appreciate it for what it was. So I gave it another shot.

Once again, I kept waiting for it to get great...and it didn’t. Other than the still-awesome effects, Blade Runner was just as boring and uninvolving as the first time. My college friends simply said I didn’t ‘get it.’

Eventually, we all learned Ridley Scott was forced by the studio to add Ford's voice-over narration (a big criticism of the theatrical movie among its zealots) and tack on a neatly-wrapped happy ending. According to Scott, his original ending was darker and more ambiguous, leaving the viewer to wonder whether or not the main character, Deckard (played by Ford), is one of the very replicants he’s recruited to kill.

So fast forward several years, when a ‘director’s cut’ of Blade Runner was released on home video, which restored Scott’s original vision. Director’s cuts and ‘special editions’ are mostly a sales ploy to get movie geeks to shell out more cash for movies they already own. On rare occasion, a new version does indeed make the film better. James Cameron’s The Abyss comes immediately to-mind. The restored footage of these aquatic aliens threatening to wipe-out the entire human race adds a lot of apocalyptic weight, and the movie as-a-whole makes a lot more sense. It changes the way we view the whole thing. 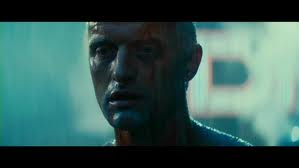 Rutger Hauer...looking like my cousin the day after his bachelor party.

But more often, restoring previously-cut scenes doesn’t make a movie better, and sometimes makes it worse. Take The Good, the Bad and the Ugly, for instance. To me, the original version was already the greatest western of all time, but the deleted scenes reinserted into the so-called special edition, featuring newly-redubbed voice-overs by Clint Eastwood and Eli Wallach (and sounding 30 years older), were distracting and did nothing for the movie but push its already-epic length toward the three hour mark.

Still, when the director’s cut of Blade Runner was announced (re-released in a few theaters as well), the ballyhooed wholesale changes were enough to make me want to revisit it yet again, since the film had so-far gone down in history as a flawed masterpiece. Maybe Ridley Scott's original vision was the great movie I'd been waiting for. So I bought the movie when it came out on video and gave it yet-another chance.

The voice-over was gone, and the film did indeed end on an ominous note, two elements which made it better than the version I saw at 18. Regarding the final scene...I agree that it is kinda cool, subtly suggesting that the character we’ve followed all through the film is just another replicant.

But in the end, Blade Runner was still a chore to sit through, and not because I didn’t ‘get it.’ I’m 48 now, and have ‘gotten’ a lot of better and smarter movies since then. If anything, what I don’t get is why this movie continues to be extolled by so many folks who think I’m an idiot for not singing its praises.

Sure, I love sci-fi, but I’m a movie fan first, regardless of genre, which is why Blade Runner doesn‘t do it for me. I’ll elaborate:
That last point is my biggest problem with it, no matter which version I see. Blade Runner feels padded out...an awesome 30 minute short inflated to two hours. Maybe a lot of sci-fi die-hards are so bowled-over by Blade Runner’s concept that it’s worth sitting through something four times longer than it needs to be.

I’ve tried real hard to find some love for Blade Runner over the years, and came up empty every time. Maybe it’s the way I’m wired, but I’d rather sit through old Star Trek episodes* for the umpteenth time than trying to find greatness in this movie. I give up.

I know I'm in the minority on this, and maybe I'm the dumbass my old college friends assumed. I’ll just have to live with it, because Blade Runner still sucks.

* Now that I think about it, this would have been a killer Star Trek episode.