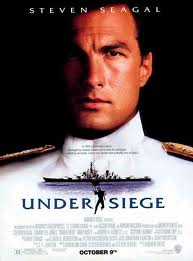 This was Steven Seagal’s biggest hit, but it also inflated his ego enough that he thought he could do anything, like direct his next film, On Deadly Ground, a sanctimonious and preachy soapbox for him to piss and moan about the environment in between dealing death blows. Even worse, he subjected us to his singing in Fire Down Below, yet another rip-your-face-off-to-save-the-environment debacle. After seeing that one, I wanted to run out and kill the first bald eagle I saw. With 20/20 hindsight, is anyone really surprised Seagal ended up doing direct-to-video junk that made Above the Law look like Serpico?

Mr. Seagal was apparently the only one who failed to notice Under Siege was his best film because he was surrounded by actual talent on both sides of the camera. It’s expertly directed by Andrew Davis (who would go on to do The Fugitive) and co-stars scenery-chewing bad guys Tommy Lee Jones & Gary Busey, who both steal the movie right from under Seagal’s expanding gut. Of course, stealing a movie from Seagal is about as difficult as taking candy from a dead baby. It’s pretty safe to say Mickey Rooney could've had the lead role and the movie would still work. 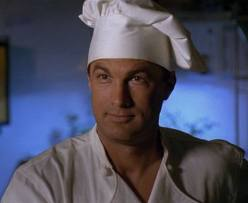 Under Siege is about a group of mercenaries, led by Jones, who seize control of a naval destroyer and threaten to launch its nuclear arsenal if their demands aren’t met. All that stands in their way is Casey Ryback (Seagal), the ship’s cook, who demonstrates his culinary abilities by stirring stuff. But Casey isn’t all that he seems; he’s an ex-Navy Seal and an expert in the art of killing. It ain’t long before he’s snapping necks, ripping out throats and making explosives out of the shit he finds on his spice rack (no wonder the soup-of-the-day always tastes suspiciously like nitroglycerine). Assisting Ryback is Jordan Tate (Erika Eleniak), a former Playboy playmate who’s there to entertain the troops (and us, since her only real spotlight moment is to pop out of a cake with her boobs a-bouncin’).

This is one of the better Die Hard knock-offs, mainly because Jones and Busey don't take themselves at all seriously, and when was the last time you could say Gary Busey was one of the best parts of a movie? Though Seagal is top-billed, the only thing he really does better than the rest of the cast is kill people, which I suppose is what we want to see. The movie is fast-paced and entertaining, though there isn’t a lot of actual Die Hard-type destruction, probably because much of it was filmed aboard a real Navy vessel. They ain't gonna destroy a boat for this guy. Bruce Willis, maybe, but not Seagal. 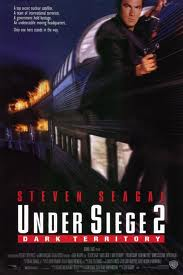 Steven Seagal returns as Casey fucking Ryback (as he's now referred to by his adversaries) in Under Siege 2: Dark Territory to create even more havoc with his kitchen full of condiments. This is Seagal's only other decent movie because of (again) the caliber of actors surrounding him, like Morris Chestnut, Everett McGill and Eric Bogosian (who has all the best lines). Seagal himself demonstrates his own considerable range by squinting and scowling like he got a whiff of some nasty flatulence. As for his delivery...he makes Clint Eastwood sound like Chris Tucker. Hey, if you really want to see Seagal's best role, try to find his Mountain Dew commercial on YouTube, where he plays himself. It’s the same performance, but at least it’s intentionally funny.

In Under Siege 2, Casey fucking Ryback is once again called upon to save the world, this time onboard a train seized by disgruntled computer whiz Travis Dane (Bogosian) and the usual assortment of professional mercenaries. Dane uses some fancy gadgets to take control of a satellite capable of triggering earthquakes anywhere on Earth he aims it. If the government doesn’t meet his demands, he’s gonna destroy the Eastern Seaboard and kill all the passengers on the train. Only Casey fucking Ryback stands in their way. Well, Morris Chestnut helps a little, but it's too bad they made his character just another 'funny black sidekick.'

We’re not talking The Missiles of October here, but what it lacks in plausibility it makes up for in mayhem. As in the first film, Seagal meets his usual quota of neck snapping & knife fights, and while Under Siege 2 isn’t quite as good, it’s bigger & flashier, culminating in a spectacular head-on collision between two speeding trains, which is gigantic. The special effects in the sequence are mostly convincing, even if watching the increasingly-rotund Seagal leap from the last car to safety decidedly isn't. 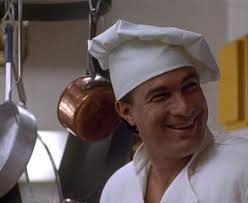 "A little salty, eh? I told ya my secret ingredient was love, heh-heh."

As if the bitchin’ train wreck weren’t enough, there’s some unintentional humor to be found in a train wreck of another kind, namely the film’s “tender” moment between Casey fucking Ryback and his estranged niece (Katherine Heigl), where we get to see Seagal try to convey remorse with the same expression he employs when bashing in faces.

Since Under Siege 2, aside from the Mountain Dew commercial, Seagal has done nothing worth watching. So I'll end this with a bit of advice...

Hey, Steve, if you're reading this, rather than venture up to Portland to apply a roundhouse kick to my computer screen, why not take that pent-up rage and do Under Siege 3? Surely you have at least a few reputable connections left in Hollywood who could make it happen. Nab yourself some awesome character actors like Christopher Walken or John Malkovich as bad guys (or if you can't afford them, maybe Bruce Campbell or Michael Ironside), and let them chew up the scenery while you go about your business of cracking limbs. Follow Stallone's lead when he did his fourth Rambo movie: swallow your pride and step back into one of your only characters anyone halfway liked. I would think swallowing your pride would come easy after that dumbass reality show you did. And who cares if Walken or Malkovich steal the movie from you? They've stolen movies from far-bigger stars, and wouldn't you rather be back dealing death on the big screen than slumming on a cable channel hardly anyone ever watches anyway?