If I Had My Own TERMINATOR

Ever since hearing that line in Terminator 2: Judgment Day, I’ve often thought about what I would do if I had my own killer cyborg programmed to obey my every command. Of course, being movie heroes, the Conner family used him to try and prevent a war which would exterminate mankind. ‘Tis a noble, selfless goal, and if I were in John’s shoes, I probably would have gotten around to saving the world, too...

...eventually. In the meantime, why not use this awesome, futuristic hunk of malevolent technology to make my own life a little easier? For example, if I had my own Terminator:
﻿ 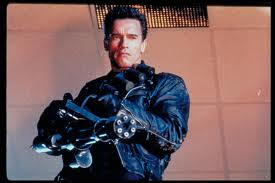 "Put away all those coupons...ahhshole."