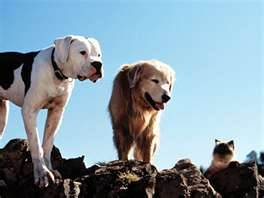 SUDDEN CAT! - These critters just love to pop out of nowhere in horror movies, startling one of the characters (and giving the audience a cheap scare). This usually happens just before a psycho/alien/monster jumps out to kill the character.

THAT BELOVED DYING DOG - As Gordon Korman once wrote, “check any book in the library with a dog and an award sticker on the cover, trust me, that dog’s going down.” (Ex: Old Yeller, Where the Red Fern Grows, Marley and Me, Sounder)

ONE-DOG DEMOLITION CREW - Whenever a large, gangly dog is introduced into a new home, it will lay-waste to so much property that, in reality, the owners would have it put down. Instead, they simply throw their arms up and cry out the pet's name in exasperation.


THE IMPOSSIBLY SMART HORSE - A staple of westerns since the genre was created, these creatures have uncanny intelligence at least equal to the bad guys, and have some sort of sixth sense to always be where their owner needs them to be in a time of crisis. Bonus cliché: the closer the horse is to his master, the more likely he is to die (Ex: Dances with Wolves).

MISUNDERSTOOD WOLF - Replacing the old cliché that all wolves are inherently evil, wolves in modern stories are now noble, maligned creatures, unfairly persecuted and hunted down by angry farmers.

SHARKS - No matter the story or film, when a shark appears, the animal has an insatiable taste for human blood and will eat far more people than it can physically stomach.

BEAUTY IS ONLY SKIN DEEP - If the animal is fuzzy, it is a loveable hero. If it is a disgusting reptile or insect, it exists to kill the hero.

SPIDERS - In movies, all spiders are aggressive and deadly. Even tarantulas, who in real life sleep for days at a time, are lightning quick and attack without provocation. Then again, who wants to see a movie about a friendly spider? (Exception: Charlotte’s Web).

AMOROUS CANINE - Telling a story and want a cheap laugh? Have a tiny dog hump a character’s leg.

CHOICE OF DOG - Heroes own mutts. Villians own purebreds.

THE NOBLE SEA-FARING MAMMAL - All dolphins and whales are totally righteous, sensitive creatures who love us just as much as we love them.

MONKEYS - Almost always depicted as endearingly cute, especially when they ape (no pun intended) human activity. Hey, these things fling their poo when angry! Then again, if we actually did that to voice our displeasure over something, most arguments would end before they began.

MONKEYS, PART 2 - Actually, the image of a poo flinging monkey is a cliché, too.

YOU GONNA EAT THAT? - Whenever a character is lost (on an island, in the desert, in the mountains, etc), he or she will inevitably be forced to eating an animal most of us would call an exterminator to get rid of. And super-brave actors like Nicholas Cage will actually do it.

CATS - Unless the story is about them, most cat characters are generally evil…and always hungry.

SELFLESS, OMINOUS INTUITION - Whenever there is a crisis threatening to destroy mankind, packs of animals do us a solid by engaging in inexplicible behavior which leads to their own deaths.

BEARS - Bears love to show up at campsites, especially if the campers are city folks not used to the great outdoors. Hilarity ensues.

NO! NOT THE DOG! - Whenever a dog dies in a movie, it is a tragedy. When a cat dies, it is exposition.

INCREDIBLE JOURNEYS - No matter the animal or breed, when abandoned, they will set off on a trek to find their masters, and somehow always succeed. And, of course, even though the master left without any regard for their pets, cry tears of joy whenever old Rex appears over the horizon. The heart-wrenching exception to this cliché is Richard Adams’ The Plague Dogs.

GENETICALLY ENHANCED SUPER BEAST - Scientists love to inject a normally docile animal with some weird concoction which turns it into a killing machine. What science stems to gain from such an experiment is still not really understood.